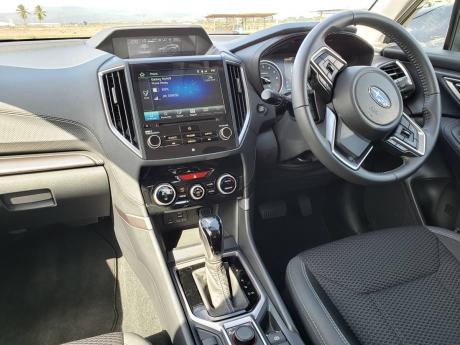 Kareem Latouche
The 6.3-inch LCD multifunction display at the top of the instrument panel provides you and your passengers with useful information in an easy-to-understand view.

The Subaru Forester has always been ahead of its time. When manufacturers were afraid to push the boundaries on the average station wagon, they did the unthinkable in 1997: they inflated the silhouette, giving it more ground clearance and cargo space, which helped popularised what is now known as a compact SUV.

With so many years ahead of the game, the company has carved out a market for itself as the Forester has been a trusted model for many persons. It has stayed true to its architectural roots as it keeps its boxy theme, and that’s something else to point out about Subaru: they stick to their fundamentals.

The tail lights and headlights have shape edges, which gives it an aura of vitality. There are also the huge wells in the front bumper, with fog lights that insinuate that the vehicle is built for speed as well.

There is a flat roofline, which ensures that tall passengers are comfortable whether they are in the front or back, something that is contrary to the sloping-roofline trend which makes so many modern vehicles look like coupes.

My first experience with a CVT was not very pleasant, but Subaru has done its best to simulate a traditional transmission as much as possible. I can confidently say that they are making some of the best CVT transmissions in the market. Now, given that it is a two-litre engine, it is not going to accelerate with breath-taking speed, but it is no slouch either.

Subaru calls this transmission, lineartronic, which uses a metal chain, pulley-based CVT, and due to the simplicity of the system, it is considered to be very reliable. It does feel more responsive than the average CVT, without the engine acting like it is searching for gears.

The compact SUV comes with a certain agility that is bolstered by its all-wheel symmetrical system. The horizontal position of the boxer engine gives it the lowest possible centre of gravity, which is great for a vehicle with an impressive 8.7 inches ground clearance. This is something most drivers will appreciate, especially when going around sharp corners.

The bread and butter for this vehicle comes with its versatility, meaning that there is nowhere you can’t take it. The intelligent fuel efficiency, which can be activated on the steering, makes it ideal for around-town driving. There is also the refined angular exterior, which looks sophisticated enough for a corporate setting as well as muscular for off-road activities.

For this reason, I took it to Holywell, which I accessed through Gordon Town. The Junction-type route through Irish Town really tested its ability to manage corners, which it did effortlessly. The rack and pinion, electric power steering system ensured that wherever the steering was turned, the nose of the vehicle went. This worked in tandem with the suspension set up, which allowed no body roll even in the steepest corner.

The ride felt very relaxing, and as such, I was able to fiddle with the 6.3-inch LCD infotainment system. The screen is flushed into the protruding centre console and is flanked by two vertical A/C vents on both sides. It has a touch-screen interface that looks lively and uses vibrant fonts to grab your attention.

Taking it for a challenge

By the time I was getting the hang of it, I had reached my destination, and the other part of my journey began. I drove to the back of Holywell, where I knew there were some steep inclines that are ideal for pick-up trucks with real off-road capabilities.

When I approached the first one, I activated XMode and programmed the second screen on the dashboard to show the vehicle information. This is very useful when driving offroad as it displays the degreed orientation of the vehicle as well as the power each wheel is getting. So if you are on a rugged terrain, you will be able to tell which tyre is getting the most power.

As I drove up the hill, I could feel some slippage and the computer figuring out which tyre to send power to. In the end, it overcame all obstacles and took me to a spot where only pick-up trucks were parked, which was impressive.

Coming down, the vehicle sensed the steepness of the hill, and the computer once again kicked in. It started to apply the brakes automatically to whichever tyre had the most traction, which ensured that the vehicle did not slide down the hill.

This driver-assistance technology makes this vehicle easy to manoeuvre for any level driver. This is why I consider it an all-rounder at its best because it brings a little bit of everything without the compromise.