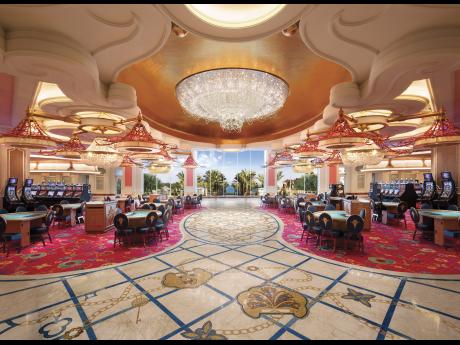 Prime Minister Perry Christie says talks in China aimed at ensuring the completion of the US$3.5 billion Baha Mar project ended without an agreement among the stakeholders.

Attorney General and Minister of Legal Affairs, Allyson Maynard Gibson QC lead a 10-member government delegation to the talks that were attended by officials from Baha Mar Limited, China State Construction Engineering Corporation and the Export-Import Bank of China.

But in a radio and television address to the nation on Thursday night, Christie said despite "working diligently around the clock" the talks ended without agreement.

During the talks it was indicated that "Baha Mar's additional funding requirements had increased considerably, and now included not only funding for completion of construction, but funding to meet start up and operating expenses; funding to cover other liabilities and deferral of principal and the initial balloon payments under the loan facility with Exim Bank," said Christie.

"I am advised that both Exim Bank and China Construction Company demonstrated flexibility in meeting Baha Mar's expanded funding requirements, and project completion date. This notwithstanding, Baha Mar still wanted an extended period for further negotiations which, however, was not acceptable."

The prime minister said Baha Mar was not prepared to agree to terms that would have included immediate discontinuance of its Chapter 11 bankruptcy proceedings in the United States and their legal action against China Construction in the United Kingdom.

Baha Mar, which is the largest project to be attempted in the Caribbean and was being done in a single phase, is 97 per cent complete. The project has missed two previous opening dates.

Christie said his government has arranged for a second payment of salaries for Baha Mar's Bahamian employees, and that the payment would be recovered later so as not to place any additional strain on Bahamian taxpayers.

He said Exim Bank and China Construction have pledged to work with The Bahamas government on the completion and opening of the project in the shortest possible time.

"In this regard it goes without saying that the completion of the Baha Mar resort is a matter of the utmost national importance. Baha Mar must open," he declared.

"Whilst we certainly remain open to further discussions, my government has taken the decision to seek to bring the Baha Mar development project under the control and supervision of the Bahamian Supreme Court, right here in The Bahamas."

The wind up petitions filed in the Bahamian court, he added, are designed to work in similar terms as a Chapter 11 filing "but with the stark difference that they will be controlled by provisional liquidators under the supervision of the Bahamian Courts rather than being controlled by Mr Izmirlian" - a reference to chairman and chief executive officer of Baha Mar Limited, Sarkis Izmirlian.

"Importantly, the role of the liquidators will be to expedite the resolution of the matter and to prepare a plan for the restructuring of Baha Mar that will result in the earliest possible completion and opening of the project," Christie said.