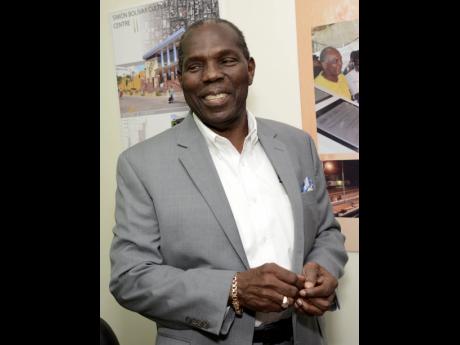 The first phase of the Festival Marketplace project to transform the Kingston waterfront into a cultural experience was the easy part - developing walkways for easy access to eateries and other establishments to evolve along Ocean Boulevard.

project that the Urban Development Corporation (UDC) says it has already

initiated discussions on with the Port Authority of Jamaica (PAJ).

"A pier will be developed beside the Festival Market," said UDC general manager Desmond Malcolm.

The project is yet to be costed, and its funding is unclear, but Malcolm insisted this week that it would accelerate changes in downtown Kingston - creating the impression that the cruise port for the

"The UDC and the PAJ - we believe that the cruise ship will be coming back to Kingston. We are working to ensure that it becomes a reality. Whet your appetite on that. That one, within a month or so, will be a very big story," he told Sunday Business.

"That will be a game changer in terms of the development of downtown."

The last cruise port developed by Jamaica, at Falmouth, was a collaboration of the UDC, the PAJ and private sector partner Royal Caribbean.

The Kingston project also has "private persons who are interested in working with us," said Malcolm in response to the financing of the project, but he did not name the parties.

The Port Royal redevelopment plan, another project of the UDC, is predicated on Kingston becoming a cruise ship port through which visitors from Central and South America will flow to the historic site.

Kingston Harbour previously facilitated cruise ships in the 1950s and 1960s. On February 14, 1966, the world's largest cruise ship at the time, SS United States, docked at Western Terminals, as stated by the Port Authority on its website.

Jamaica already receives over one-million cruise passengers a year at its four major cruise ports in Montego Bay, Falmouth, Ocho Rios and Port Antonio. Falmouth was developed at a cost of US$269 million and commissioned in March 2011.

Alongside the plan for the new cruise ship pier and terminal in Kingston, which will form phase two of the Festival Marketplace project, are plans for in-bond and local shopping, restaurants and bars, indoor and outdoor exhibition space, loft apartments, a vendor arcade, food bazaar, gardens and waterfront promenade and a bridge over Port Royal Street to link to the transportation centre.

Malcolm said the phase one project - hard surfacing and pathways being done by Chin's Construction and Contra Construction at a cost of $68 million - is to be completed by mid-August. The Festival Marketplace will open officially soon after, he said.

The Marketplace will span approximately 3.6 hectares or 8.9 acres of the waterfront. The UDC invited investment in the project at the recently concluded diaspora conference, saying the components include renovations to the existing Victoria Craft Market consisting of two floors, five double occupancy vending shops, an information kiosk and a car park that can accommodate 62 cars and three buses.

Already, the UDC has leased the nearby Victoria Pier building to Yosamini Holdings Limited for a period of 25 years. Yosamini has proposed to transform the property into "an 'A' class' restaurant with lounge, sports gaming facility, art gallery and outdoor entertainment area".