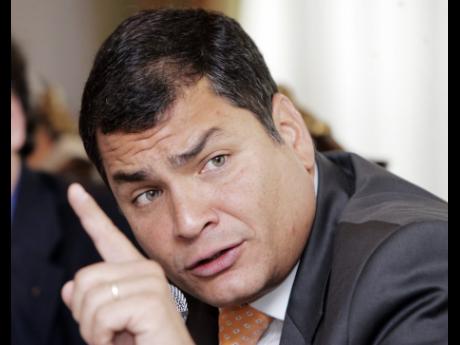 Armed with a doctorate from the University of Illinois and trained under the wings of Werner Baer, Correa marked the start of a new era. His close affiliation with Venezuelan President Hugo Ch·vez and Bolivian President Evo Morales made him a card-carrying member of the BolÌvarian movement.

He antagonised investors soon after taking office when he selectively defaulted on the country's debt, and then bought back the bonds at a deep discount. However, he also enjoyed the combined benefits of the oil boom and the weak US dollar.

The Ecuadorian government fully dollarised in 1999, in a desperate attempt to stabilise the collapsing economy. The move turned out to be fortuitous because the greenback was extremely weak for the next dozen years. This allowed Ecuador to steal a march on its neighbours. For example, Ecuadorian flower growers gained market share from Colombian competitors, even taking control over the lucrative Russian market.

The oil boom allowed Quito to pour millions of dollars into new roads and highways, thus modernising the country's infrastructure and transportation network. At the same time, President Correa was able to increase his grip on the country's political apparatus, becoming a virtual autocrat in the style of Hugo Ch·vez.

However, he has worn out his welcome. Buffeted by the decline in oil prices and the unending appreciation of the dollar, the economic wizard has run out of tricks. The economy is faltering, and social unrest is on the rise. The Correa story is looking worn around the edges, and it is time for change.

Ecuador's numbers look tired. Plunging oil prices are putting squeeze on the country's fiscal and external accounts. The fiscal deficit is estimated at more than three per cent of GDP, and the trade deficit is projected at more than US$4 billion. Fortunately, remittances are picking up. A large number of Ecuadorians live in the United States and Spain, two economies that are rebounding.

One of the main problems is that oil accounts for 60 per cent of exports, and the decline in energy prices has led to a massive reduction in royalties. Now, the government must launch an extensive fiscal reform to make up for the shortfall. The extent of the adjustment could be upwards of 10 per cent of GDP.

To make matters worse, Ecuador's major trading partners/competitors have seen their currencies devalue almost 50 per cent against the dollar. On a trade-weighted basis, given that devaluation is not an option, the country will need to reduce its real exchange rate by as much as 25 per cent. This can only be achieved by wage cuts and a massive reduction in costs.

Argentina tried valiantly to impose such a draconian adjustment from 1999 to 2001. However, it was not able to do so. In the end, the Argentines decided to throw in the towel. The devaluation of the Argentine peso coincided with default and a deep economic adjustment that wiped out the financial system.

Nothing of the sort is being contemplated in Ecuador - yet. However, S&P reduced the country's sovereign credit rating to B from B+. The official projection for GDP growth this year was reduced to 1.9 per cent y/y, from 4.1 per cent y/y. However, there is a good chance that this year's change in output will be in negative territory.

The economic malaise is fuelling political unrest. Although President Correa was elected to three terms in office, his support has been waning. In July, a survey conducted by CEDATUS/Gallup put his support level below his rejection level for the first time since he took office. A national survey showed that 46 per cent of the population disapproved of his policies, while 45 per cent approved it.

A national strike was launched in early August, and thousands of indigenous peasants marched on Quito chanting, "Out with Correa." There is a great deal of resentment against a recent legislative proposal allowing unrestricted re-elections. Given the president's stranglehold on the political apparatus, it is possible that the law could be approved.

Correa's mandate ends in 2017. He has not given any indication that he would run again, but he did say that he would go for a fourth term in office if the country needed it. His magnanimous gesture only provoked further anger.

It is hard to see what lies ahead, but it probably won't be anything good.