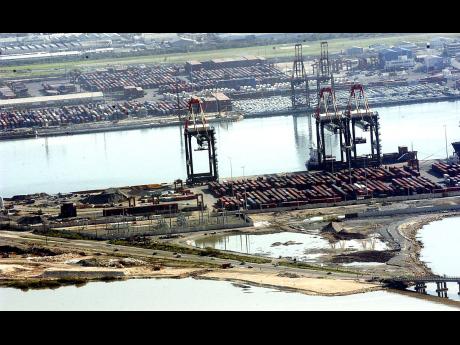 Gleaner File
An aerial shot of Port Bustamante in Kingston.

Most sensible and thinking persons would believe that with a debt burden of about $2.2 trillion the economic managers in the Government would be doing all in their power to increase our exports.

In 2014, according to data published by the Planning Institute of Jamaica, imports totalled US$5.84 billion while we exported a mere 24 per cent of our imports, at a measly US$1.45 billion.

Dr Peter Phillips and others in the Government speak glibly about economic growth, and the regular quarterly Economic Programme Oversight Committee (EPOC) report and its equally consistent press briefing have adopted the following rather depressing recurring refrain on economic growth: GDP growth was also positive, though not as strong as we may have liked. The EPOC communiquÈs are peppered with lots of data - headed by the NIR and the oversized primary balance figures - but the figure on economic growth is buried deep in the prose.

There is a reason for the burial of the growth figure. EPOC's CommuniquÈ 27 published on August 14 had this to say: "Growth in GDP for the quarter January-March 2015 versus the same period in 2014 was 0.4 per cent". That was it. That puny growth figure resided in the vicinity of a weak statistical-error that could hardly be labelled as positive.

It is very clear that government leaders have no idea what they are talking or singing about when they mention economic growth.

With our debt to GDP hovering in the unsustainable statistical territory of about 136 per cent, and that our exports are less than a quarter of our imports, with those export figures falling for the last two years, thinking and suffering Jamaicans would hope that the Government would target the increase in exports as a primary growth objective.

But cocoa, coffee and most every manufacturer need some no-value-adding approving entity's permission to export.

Alas, there is no growth strategy crafted by this PNP government, or any other before this. And heaven forbid that they would name a growth minister.

I hope Prime Minister Portia Simpson Miller and her finance minister, Dr Phillips, were listening carefully to British Prime Minister David Cameron's speech in Parliament on Wednesday of this week.

Apart from the more memorable grant figures he announced, he also made it clear that he has a huge export target for British business to achieve and he is leading the drive from the front.

Prime Minister Cameron understands the role of economic growth in building a better British society. He knows the crucial part exports play in that growth strategy, and especially in stabilising the pound sterling in a world where local currencies are so affected by international markets. Contrast that with our Jamaican situation. Anthony Hylton, our minister of industry, investment and commerce waxed warmly in speeches - although not so much these days after he bit his tongue in the 'Crown and Anchor' debacle - about how the proposed Jamaican logistics hub would complement, maybe even compete with, the renovated Panama Canal.

Well, our logistics hub has not been seen and those who seek it find only a disappearing mirage. The truth is, we in Jamaica find every impediment to kill our exports and drive manufacturers and exporters from Jamaica.

The Dominican Republic matches or is close to the Panamanian time and figure. Jamaican exporters just cannot be competitive because of the way our Government runs the port as a fee and tax-collection rather than a service-delivery entity, and refuses to chop out the unnecessary and very costly bureaucracy.

A year ago last October, the Customs Act of 1942 was amended to improve efficiency and quicken customs clearance. Earlier this year, it took eight ministries four months to sign a MOU among themselves.

According to the Observer of July 26, 2015, the Trade Facilitation MOU was signed by ministers, permanent secretaries and other representatives of the Ministries of Industry Investment and Commerce; Foreign Affairs and Foreign Trade; Health; Agriculture and Fisheries; Science, Technology, Energy and Mining; National Security; Transport, Works and Housing; Finance and Planning; and the Cabinet Office.

I put in the whole list so you can understand how painfully, poorly and sadly our Government works. Four months to sign an MOU with itself! Please note how many players needed to get involved in signing that MOU - practically the whole Cabinet. There has to be a much better way. And still the Government crows about how foreigners say that Jamaica has improved its ease-of-doing-business rating.

Those foreigners who did those ratings and/or praised the Government missed checking how long an intergovernmental MOU takes to sign; or maybe they are investors in the Panama Canal or in exporting companies in the Dominican Republic and have an interest in keeping us where we are.

After all those months to sign that MOU, 60 per cent of those proposed changes and amendments are to increase penalties - in other words, collect more taxes to feed Dr. Phillips' extremely high primary surplus target. It is not about providing quick, efficient services to help users of the port compete to win against foreign competitors.

The amended customs legislation is moving in another wrong direction. It is proposing to place far too much power in the hands of the commissioner of customs.

Just as the power to grant waivers has been largely removed from ministers, so too must the proposed amendments remove all that discretionary power from the commissioner.