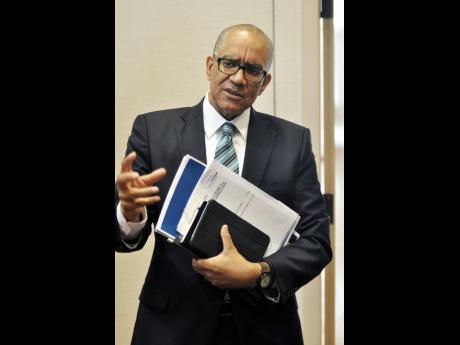 Jermaine Barnaby
Governor of the Bank of Jamaica, Brian Wynter.

Jamaica has achieved significant economic progress over the last three years but needs to sustain reform efforts for up to 15 years, according to Bank of Jamaica Governor Brian Wynter.

Reform efforts since 2012 has led to significant gains, he said, but they need to be sustained for five times longer.

Wynter said economic growth has passed Jamaica by for an extended period before the country suffered a massive hit in the global financial crisis of 2008 to 2009.

Jamaica's circumstances after the crisis were extremely dire with serious consequences for human capital, the Governor said at a seminar on capacity development in Latin America and the Caribbean during the International Monetary Fund (IMF) and World Bank meetings at the Lima Convention Centre.

Wynter said the country was vulnerable to external shocks, but has benefited from "tremendous help" from the IMF, with which Jamaica signed a four-year extended fund facility agreement in 2013, as well as assistance from other institutions, which include the World Bank.

Wynter, the current chair of CARTAC's steering committee, said, however, that he wanted to make a strong pitch for increasing the role of the centre.

Among those, he said, was the need for CARTAC to examine measures to offer internships to younger gradates and increasing the provision of peer-to-peer training.

Barbados-based CARTAC is one of eight IMF regional technical assistance centres that started operations in 2001.