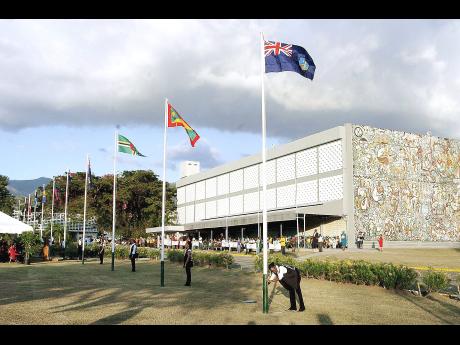 File
A flag pole is adjusted on the grounds of the Mona campus of the University of the West Indies. UWIDEF and Ad Pro have partnered on an advertising venture called MONAVIEW to take advantage of the captive market on the campus.

The University of the West Indies (UWI) has entered the advertising market through its UWI Development and Endowment Fund (UWIDEF).

It has partnered with advertising company Advertising Professional Limited (Ad Pro) to push advertisements on its campuses through a digital signage system called MONAVIEW.

Digital boards are strategically placed in high-traffic areas on the Mona campus and western campuses, which UWIDEF says has reach of "over 16,000 at the Mona and Montego Bay campuses".

The partners, through press advertisements, have called local goods and services providers to place advertisements on 55 to 80-inch plasma screens positioned in 11 locations with "24 hour constant viewership".

Executive Director of UWIDEF Carla Seaga declined to comment on the advertising project, as did Ad Pro Director Maurice Chung.

UWIDEF was incorporated in 1990. The recognised charity works with the UWI Mona Office of Student Financing to provide scholarships to students of the university.

The advertising partners have promised "premium packages" starting at $10,500 to advertisers, which will also help to fund scholarships and the development of the UWI.