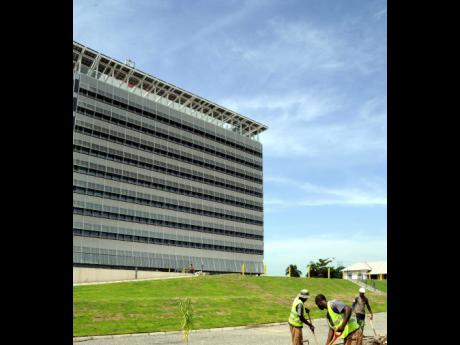 Norman Grindley
A work crew is seen on the grounds of Digicel Headquarters in Kingston.

Telecoms provider Digicel Group has bought controlling stake in a financial-services firm that it intends to use as a platform for its entry into the mobile money market in Jamaica.

The acquisition price for the Prism Holdings businesses was not disclosed, nor the amount of shares now held by Digicel.

"Prism is a group of companies, so the ownership is different percentages in different entities," said the head of group public relations at Digicel, Antonia Graham. "However, Digicel is the majority shareholder in all cases," she said on Thursday.

The purchase gives the telecoms a piece of the loyalty card market in Jamaica and the Caribbean, through Magna Rewards. But Digicel also intends to offer products such as mobile wallet "as soon as the regulatory environment permits," Graham said.

"Digicel has already successfully launched mobile wallet in Haiti under the brand 'Mon Cash' and would hope to do similar in Jamaica if the regulatory environment would permit," Graham said.

Mon Cash, which was formerly known as Tcho Tcho, is offered by Digicel in partnership with Scotiabank Haiti. Here in Jamaica, Graham said Digicel is working with Sagicor Bank on its local product and that the application for the licence would be done by its banking partner.

The telecoms would be entering a market that is just evolving, with only one entity, the umbrella credit union group and its technology partner Mozido, known to have come out with a branded mobile money product, called Conec.

On Thursday, the Bank of Jamaica (BOJ) said it had approved five mobile money pilots, including mobile wallets, but declined to name the entities involved, saying it would be a breach of confidentiality.

However, reports to date indicate that they include GraceKennedy Payment Services and Supreme Ventures Limited.

BOJ says it uses the recognised definition of mobile wallet as "a software application on a mobile handset that functions as a digital container for payment cards, tickets, loyalty cards, receipts, vouchers, and other items that might be found in a conventional wallet". It is otherwise described as preloaded credit held in an account made available by the wallet service provider, which can be spent with merchants whether online or at places of business.

Prism Holdings is a low-key, privately held operation established in 1993 in Barbados by Edward Ince and Mike Parris. They have mostly concentrated on business-to-business operations in 22 countries from their regional headquarters in Barbados, and offices in The Bahamas, Jamaica and Trinidad & Tobago. Prism provides payment systems, information management, data-centre services, loyalty processing and financial transactional processing.

Graham said Prism will continue to operate as a stand-alone entity within the Digicel family and under the continued leadership of Ince and Parris. They will report to Barry O'Brien, a former CEO of Digicel Jamaica and now group director for business development. O'Brien oversees Digicel's interests in non-mobile and broadband businesses. Graham said this would now also include Prism.

Prism is looking towards the Digicel partnership for growth.

"This move means accelerated growth for our business and gives us the ability to take advantage of bigger opportunities coming down the track," said Ince and Parris in a joint statement with Digicel.