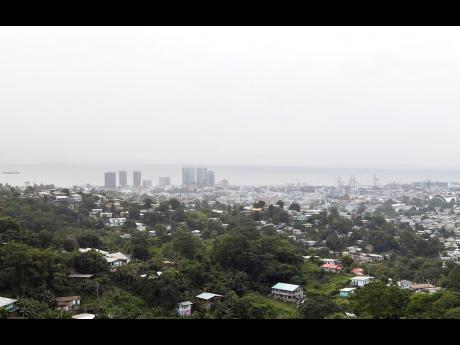 AP
This January 1, 2016 photo shows a view of Port-of-Spain, the capital of Trinidad and Tobago.

During the good times, earnings from natural gas and oil exports made the tiny Caribbean nation of Trinidad and Tobago one of the richest countries in the Western Hemisphere. The collapse in world oil prices now has it facing the threat of a punishing and prolonged downturn.

After two decades of nearly uninterrupted prosperity, the government is being forced to scale back spending by 7 per cent, siphon some US$1.5 billion from a stabilisation fund over the next couple of years, and warn its 1.3 million people that they will have to make do with less.

"We must all appreciate that the circumstances we now face as a nation require sacrifice and managed adjustment in our living standards," Prime Minister Keith Rowley cautioned in a recent speech.

Those standards include American-style shopping malls, cheap electricity, subsidised gasolene and so many families with multiple cars that highways weaving past abandoned cane fields are often clogged with traffic jams in both directions.

Things have been going so well for so many years that locals repeat the mantra "God is a Trini", meaning the twin-island republic, known for high spirits and rollicking Carnival celebrations, is so blessed that things will always turn out well. But the spectre of tough economic times is starting to prompt a glum self-examination.

"You can see it coming. Times will be getting hard. Previous governments have spent too lavishly, and now it's time we have to pay the piper," said Adrian Lashley, a father of five who runs a small clothing shop in downtown Port-of-Spain, the capital.

Trinidad gets roughly 45 per cent of its gross domestic product (GDP), and 80 per cent of export revenue from the energy industry. In June 2014, the price of Trinidad's benchmark crude was US$106 per barrel and the government had drawn its 2015 budget anticipating US$80 a barrel, but the price has plummeted to near US$30. Prices for liquid natural gas, Trinidad's main export, have declined by some 45 per cent.

The global price collapse has already inflicted serious economic damage in oil-producing nations such as Venezuela and Nigeria. With forecasts suggesting that world prices won't recover anytime soon, economists say this downturn will have a serious bite. Last month, the Central Bank of Trinidad and Tobago announced that the country was officially in recession, with no economic growth in 2015.

"The situation is very, very dire because of the extent to which we depend on the oil and gas sector. The government's no longer going to have access to the kind of resources it's been used to in order to maintain the country," said economist Indera Sagewan-Alli, executive director of the University of the West Indies' Caribbean Centre for Competitiveness.

While it has exported oil for over a century, Trinidad and Tobago, just 11 kilometres off the coast of oil giant Venezuela, became a significant global energy player about 25 years ago when it tapped big reserves of natural gas. That helped rescue the country following an oil bust in the 1980s that touched off labour unrest, contracted the economy by 35 per cent, and forced the government to seek help from the International Monetary Fund.

Rowley, who took office in September, has warned that the country will have to go to the IMF again if it doesn't make the right adjustments now. Trinidad and Tobago has few local industries, so the economy is almost entirely dependent on foreign exchange.

"We need it for food, medicines, clothing, books and education, cars, trucks and tractors, and computers. We are very dependent on foreign exchange to sustain our economy and our standard of living," Rowley said.

The government is calling on businesses to find cheaper sources of imports and for consumers to buy whatever locally produced goods they can find. Rowley said government spending must be slashed as its expenditures are roughly 35 per cent of GDP.

For many years, officials have repeatedly said that Trinidad's economic base had to be broadened to provide protection from global energy downturns. Yet, little has been achieved even as proven natural gas reserves declined.

Terrence Farrell, a former Central Bank deputy governor, told The Associated Press that Trinidad and Tobago is in a stronger position now than during the oil bust of the early 1980s. It's built up roughly US$10 billion in official reserves and US$5.6 billion in a "heritage and stabilisation fund" created in 2007, which can help cushion swings in energy prices.

Still, he said mismanagement and corruption over the decades have meant far too much money vanished or was frittered away.

"There's no question we ought to be in a better position than we are right now," Farrell said. "We clearly could have done a lot more with our oil and gas resources."