Bolt’s celebrity continues to pay off for Puma 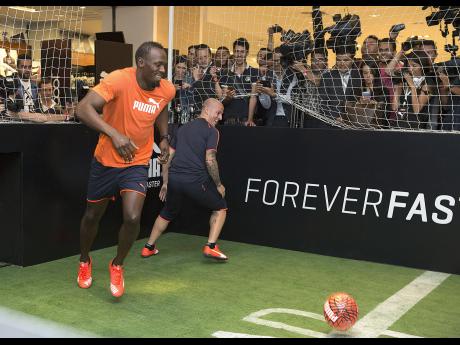 AP
In this October 7, 2015 photo, Jamaica's sprint star Usain Bolt plays a mini football match against Dario Benedetto of Argentina, who plays for the America team in the Mexican league, during a promotional event for Puma at a department store in Mexico City.

It signals the continued importance of local talent and international celebrity to the global company.

The company expects sales to rise further during the summer Olympics based on the expected increased brand exposure.

"With major improvements in the product offering, improved sourcing and higher investments in marketing, Puma is confident that 2016 will be a year of solid sales growth with an initial improvement of profitability," said Gulden, adding that the company expects earnings before interest and taxation for the full-year 2016 to range between €115 million and €125 million, with net earnings forecast to improve correspondingly.

"We look forward to a great sports year with the Olympic Games in Rio, Copa America in the United States and the UEFA Euro 2016 in France. We feel we are well prepared with better products, more and better marketing and an even closer cooperation with our retailers," he said.

Group sales increased 14 per cent to €3.4 billion over 12 months ending December 2015 but its net earnings dipped from €64.1 million to €37.1 million year on year. In late 2014, the company launched its largest advertising campaign to date dubbed 'Forever Faster', led by Bolt and Barbadian pop star Rihanna. The campaign seeks to position Puma as the 'Fastest Sports Brand' in the world.

In 2015, Puma developed a completely new 'Forever Faster' store concept for its own retail stores. This concept was first introduced at the group headquarters in Herzogenaurach and then in 14 additional locations during the year. Puma said the new store concept optimises the presentation of its products and related technologies.

"In December 2015, we extended our roster of world-class athletes in our Running and Training category through a new endorsement partnership with Canadian sprint sensation Andre De Grasse, which followed a number of other signings, including Asafa Powell and Jenna Prandini," the company said.