Something strange in Usain Bolt’s Stride 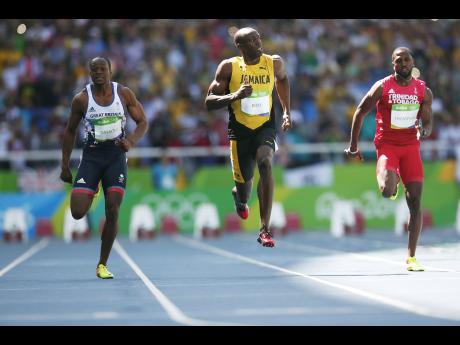 Contributed
Usain Bolt runs a preliminary heat in the men's 100m at the Olympic Stadium in Rio de Janeiro. 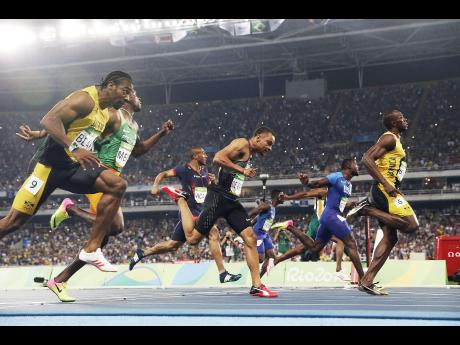 Contributed
Usain Bolt in action in the men's 100m at the Summer Olympics in Rio de Janeiro last year. 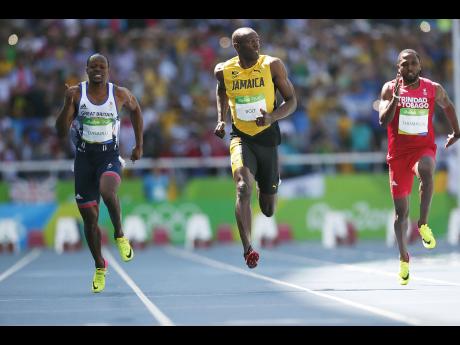 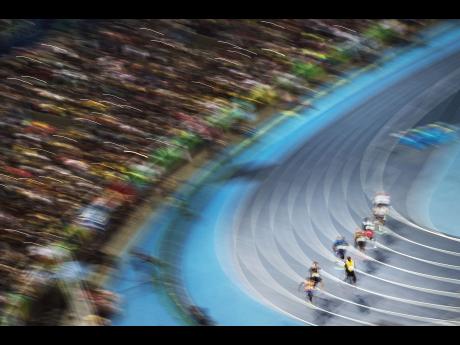 Usain Bolt of Jamaica appeared on a video screen in a white singlet and black tights, sprinting in slow motion through the final half of a 100-metre race. Each stride covered nine feet, his upper body moving up and down almost imperceptibly, his feet striking the track and rising so rapidly that his heels did not touch the ground.

Bolt is the fastest sprinter in history, the world record holder at 100 and 200 metres and the only person to win both events at three Olympics. Yet, as he approaches his 31st birthday and retirement this summer, scientists are still trying to fully understand how Bolt achieved his unprecedented speed.

Last June, researchers here at Southern Methodist University (SMU), among the leading experts on the biomechanics of sprinting, said they found something unexpected during video examination of Bolt's stride: His right leg appears to strike the track with about 13 per cent more peak force than his left leg. And with each stride, his left leg remains on the ground about 14 per cent longer than his right leg.

This runs counter to conventional wisdom, based on limited science, that an uneven stride tends to slow a runner down.

So the research team at SMU's Locomotor Performance Laboratory is considering a number of questions as Bolt prepares for what he said would be his final performances at a major international competition - the 100 metres today and 4x100-metre relay next Saturday at the IAAF World Championships in London.

Among those questions: Does evenness of stride matter for speed? Did Bolt optimise this irregularity to become the fastest human? Or, with a more balanced stride during his prime, could he have run even faster than 9.58 seconds at the 100 metres and 19.19 seconds at the 200 metres?

A SOUTHERN Methodist University (SMU) study of Usain Bolt, led by Andrew Udofa, a doctoral researcher, is not yet complete. And the effect of asymmetrical strides on speed is still not well understood. But rather than being detrimental for Bolt, the consequences of an uneven stride may actually be beneficial, said Peter Weyand, director of the SMU lab.

It could be that Bolt has naturally settled into his stride to accommodate the effects of scoliosis. The condition curved his spine to the right and made his right leg half an inch shorter than his left, according to his autobiography.

Initial findings from the study were presented in June at an international conference on biomechanics in Cologne, Germany. Most elite sprinters have relatively even strides, but not all. The extent of Bolt's variability appears to be unusual, Weyand said.

"Our working idea is that he's probably optimised his speed, and that asymmetry reflects that," said Weyand.

"In other words, correcting his asymmetry would not speed him up and might even slow him down. If he were to run symmetrically, it could be an unnatural gait for him."

Antti Mero, an exercise physiologist at the University of Jyvaskyla in Finland, who has researched Bolt's fastest races, said he was intrigued by the SMU findings.

"Generally, there are small differences between the right and left leg, but I think they are normally about one, two, three per cent," Mero said in a telephone interview. "This sounds a little bigger."

Given the scoliosis and discrepancy in the length of Bolt's legs, Mero said, the sprinter's stride appeared optimal for him.

"If the coach would try to change the pattern, it would not be good," Mero said.

Jamaican men and women won 11 of the 18 available medals in the 100 at the past three Olympics, though the Caribbean island has a population of only 2.8 million. Theories about Jamaican sprinting success have ranged from their proportion of fast-twitch muscle fibres to a renowned youth development system to a public health campaign dating to the 1920s.

At its most basic, speed is the product of stride length times stride frequency. Though Bolt stands 6 feet 5 inches, he starts nearly as explosively as smaller sprinters and needs only 41 strides to cover 100 metres, while other elite runners need 43 or 45 or even 48.

No sprinter can accelerate for a full 100 metres. But once Bolt reaches top speed at 60 to 70 metres, he maintains his velocity more efficiently than others, decelerating less towards the finish line. The winner of a sprint is not the person speeding up the fastest at the end but slowing down the slowest.

It was once widely assumed that the swiftest runners achieved top speed by swinging their legs more rapidly than slow runners while repositioning their limbs between take-off and landing.

In a 2000 study, Peter Weyand, director of Southern Methodist University (SMU), then working with a team at Harvard, determined that elite sprinters did not swing their legs appreciably quicker through the air. Instead, they gained maximum speed by striking the ground with a greater force than others in relation to their body weight, and for a shorter period of time.

For Olympic-calibre sprinters, that peak force can equal five times their body weight, providing lift and propulsion to begin the next stride. In Bolt's case, his peak force can surpass 1,000 pounds.

Peak impact force is delivered within 0.03 seconds of striking the track. It is one of the most critical moments of sprinting. Less force put into the ground means less pop back into the air. Laurence Ryan, a physicist in the SMU lab, calls that period "30 milliseconds to glory".

In other words, Weyand said, "You win your medal or you're out of the running based on that short duration."

Unlike elite marathon runners, who strike the ground with a force equal to about three times their body weight and who must repeat each step about 25,000 times over 26.2 miles, sprinters are not concerned with endurance and fuel efficiency over 100 metres.

Marathon runners are the biped equivalent of a Prius. Sprinters are like dragsters, seeking to generate maximum speed and power over a short distance.

Elite sprinters do not land passively and spring back into the air as if their legs were pogo sticks, the SMU lab found in two 2014 studies. Instead, the sprinters cock the lead knee high and drive the foot into the track with a stiffened ankle. Essentially, it is a punch delivered with high velocity and a sudden stop.

"It's like a ball bearing hitting the ground," said Laurence Ryan, a physicist at SMU.

Sprinters like Bolt land just behind the ball of the foot, which strikes the ground at an angle of about six degrees. His lower leg decelerates abruptly, absorbing 16 Gs of force. His heel drops for only 0.02 seconds - the equivalent of an inch - before rising again. The total time spent on the ground with each stride is about 0.09 seconds.

In effect, there is one biomechanical way for world-class sprinters to run extremely fast.

"They're machine-like," said Peter Weyand, director of SMU. "It's incredible the extent to which they do the same thing."

The SMU researchers did not know that one of Bolt's legs was longer than the other when they began their study six months ago. They were testing a new motion-based technique, called the two-mass model, which allows them to determine ground forces by using high-speed video of races instead of specially equipped treadmills in the lab.

Andrew Udofa, a doctoral researcher at SMU, examined 20 steps apiece taken by Bolt and three other elite 100-metre sprinters, using video from a race in Monaco in 2011.

On average, Bolt struck the ground with 1,080 pounds of peak force on his right leg and 955 pounds on his left leg. Because his right leg is shorter, it has a slightly longer drop to the track, contributing to a higher velocity for that step.

"The logical thing to think is, well, you want both legs to deliver as much force as possible and if one is not delivering as much force, if it delivered more force, he'd go faster," Weyand said. "But that superficial logic doesn't really flesh out."

Ralph Mann, a pioneering biomechanics researcher in the United States, said he could detect a kind of gallop in Bolt's uneven stride. But a variability of 13 or 14 per cent was surprising, Mann said, given that his consulting work with USA Track and Field generally found an asymmetry between zero and seven per cent among elite sprinters.

"That's a huge number; when you see that you're going to find a physical abnormality," said Mann, who won a silver medal in the 400-metre hurdles at the 1972 Munich Olympics. But by strengthening the so-called weaker leg, he added, "I can think of no reason why that's not going to improve performance."

There is one person who apparently does not find the SMU research particularly interesting. That is Bolt himself, according to his agent, Ricky Simms, who said in an email, "He isn't the kind of person who studies this type of thing."

But Simms, an Irishman who studied biomechanics at university, said he found the research illuminating, given Bolt's history of back and leg injuries and his need for regular therapy to stay healthy. He has struggled in his two races this year and has yet to break 10 seconds in the 100.

"I expect the researchers may get varying results in tests like this depending on which race they were analysing and depending on what particular muscle or joint was tight at the time," Simms said.

Shortly after Bolt retires, the SMU researchers hope to persuade him to visit their lab for more direct testing on a treadmill.

"People donate their bodies to science," said Peter Weyand, director of (SMU), who is leading the study. "He could donate his forces to science."