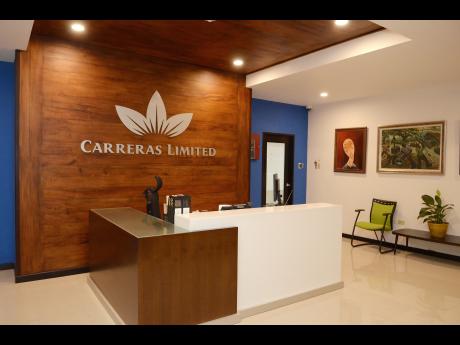 Inside the corporate offices of Carreras Limited, at Ripon Road, New Kingston.

Cigarette distributor Carreras Limited's annual profit rose marginally to $3 billion at March 2016, but its return on total equity rocketed to near ten-year highs as the company shed billions from its balance sheet.

Essentially, it became as lean as the cigarettes it sells.

Carreras' ROE stood at 168 per cent at year end, up from roughly 100 per cent a year ago. It means shareholders are getting more profit from money deployed in the business, at least on paper.

The increased returns came amid a large reduction in total equity from $3.2 billion to $1.77 billion. Overall, the total assets at Carreras dipped 40 per cent to $3.7 billion, while total liabilities dipped 36 per cent to $1.9 billion.

The main reason for the waning assets surrounds the reduction of $1.1 billion in cash and equivalents and another $900 million reduction in accounts receivable. The latter related to an extraordinary payment from the Jamaica Government a year earlier arising from a long-standing court matter with Tax Administration Jamaica (TAJ) and a Carreras subsidiary.

"During the year, an offset of $870 million, compared to $2.64 billion in 2015, was issued by the TAJ to the company to fully extinguish TAJ's liability to Cigarette Company of Jamaica under the settlement agreement by June 2015," stated the company's audited results.

In 2004, Cigarette Company, now in voluntary liquidation, received assessments for income tax claimed by the tax authorities for the years 1997-2002 amounting to $5.68 billion, including penalty and interest. In December 2013, the company reached an agreement with the TAJ and the Ministry of Finance & Planning to recover the $1.73 billion plus interest of $1.78 billion on the outstanding sum.

Over the decade, Carreras usually recorded a ROE of roughly 100 per cent per period, but its highest occurred in the 2013 financial year at 169 per cent and the lowest at 40.9 per cent in 2007.

For the 2016 results, revenues at Carreras totalled $11.9 billion, up 6.2 per cent year-on-year, while its expenses rose incrementally.

Its top line performance is partially constrained by stringent regulations imposed by the Government in 2013 that ban smoking in enclosed spaces under the Public Health Tobacco Control Regulations.

There are plans for Government to impose a second phase of tobacco restrictions which are expected to affect tobacco advertising, promotion and sponsorship. It forms part of the international Framework Convention on Tobacco Control, ratified by Jamaica in 2005.

Last year, a decade after exiting manufacturing, Carreras sold its Spanish Town complex and head office of over 50 years for $395 million. The company then relocated its head office to Ripon Road in New Kingston and its sales depot to Hagley Park Road in Kingston.