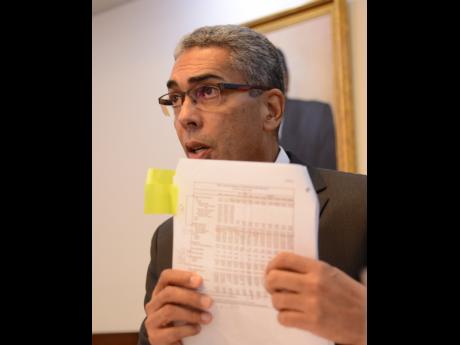 The ratio of Jamaica's stock of public debt-to-gross domestic product (GDP) was reduced to 120.2 per cent as at March this year, better than the projected 125.1 per cent set under the economic support programme with the International Monetary Fund (IMF), according to data from the Ministry of Finance and the Public Service.

It is also a considerable improvement over the 136.6 per cent at the end of March 2015, co-chairman of the Economic Programme Oversight Committee (EPOC), Richard Byles reported on Friday.

"So this puts us in a pretty strong position to continue to achieve the reduction in the debt-to-GDP in the future," Byles told a press briefing at Sagicor Life, New Kingston where he released the 39th communique of the non-public sector members of EPOC.

The March 2016 outcome in the debt-to-GDP ratio was negatively influenced by the depreciation in the value of the Jamaican dollar relative to the US dollar, which impacted the debt because 75 per cent is denominated in foreign currency, he said.

It was also negatively influenced by an inflation rate of negative 1.3 per cent in the January to March quarter, which would have reduced the size of nominal GDP, the EPOC co-chairman said.

Byles said that on the positive side and outweighing the negative influences was the PetroCaribe transaction, which reduced the debt-to-GDP by approximately 10 per cent.

However, "we can't become complacent in respect of this debt-to-GDP target" because "120 per cent, as improved as it is for us in Jamaica, is twice the level that economists say countries should not exceed," he added.

Byles also reported that for the quarter to June, the government's expenditure was $122.7 billion or 8.1 per cent lower than budgeted.

However, Byles noted that as was the case in the two months prior to June, the under-expenditure was largely because of the late approval of the 2016/17 Budget, but "I expect that as the year goes on we will catch up with the budget on the expenditure side."

On the other hand, according to the communique, the tax package announced by the government has been implemented and when data for July is released, "we expect to see the impact of the increase in the personal income tax threshold on PAYE (pay-as-you-earn) taxes."

Byles said there was likely to be a $1.3 billion per month decrease in PAYE collections because of the adjustment in the tax threshold.

The Net International Reserves at the end of the quarter stood at US$2.28 billion, against an IMF target of US$1.81 billion.

Data released by the Statistical Institute of Jamaica show that inflation for June was 0.9 per cent, "the highest that we have had since July last year," Byles said.

Inflation was driven largely by electricity, up four per cent, and transport, up 2.1 per cent.

He said the upward movement in electricity and transport was driven largely by world oil prices which ticked up in the quarter, the Special Consumption Tax (SCT) which has been placed on the heavy fuel oil going to the Jamaica Public Service, and the SCT of $7 a litre that was placed on fuel.

"It's a pretty high number," Byles said of the inflation rate, noting that the calendar year-to-date inflation rate is negative 0.6 per cent and the 12-month trailing rate 2.5 per cent.

Preliminary balance of payments data from the Bank of Jamaica show the current account deficit registered a surplus of US$44.5 million for the quarter ended March 2016.

The out-turn reflected a significant improvement of US$104.7 million relative to the corresponding quarter of 2015 and was driven largely by a US$55.8 million higher surplus from tourism. In the goods sub-account, the deficit fell by US$30.9 million, largely attributable to a decline in imports, reflecting lower expenditure on fuel and some consumer goods.

Byles said that despite the stability in the basic fundamentals of the economy Jamaica still face challenges.

Among them is the need to embark on that aspect of the public sector transformation programme to reduce the current wage-to-GDP ratio from 10.3 per cent to nine per cent by 2018/19.

Byles said that would result in annual savings of $20 billion, which is badly needed for infrastructure investment.

Another challenge is to fund the further reduction in the personal income tax threshold, which is expected to cost the government an additional $16 billion starting in April 2017, "without disrupting the primary balance surplus generation and without instituting draconian tax measures that either hurt business confidence or impact consumer confidence and purchasing power too much," he said.