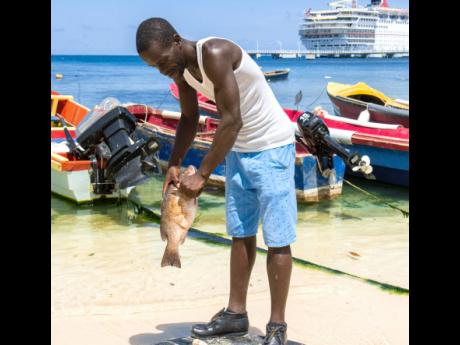 President of the Sailor’s Hole Benevolent Society, Orville Grant removes the scales from a fish at the fishing village in Ocho Rios, which is being upgraded, while a cruise ship sits in the backaground. The ongoing transformation of the Ocho Rios Fishing Village is partly meant to position the facility as an eatery that can draw tourism business. 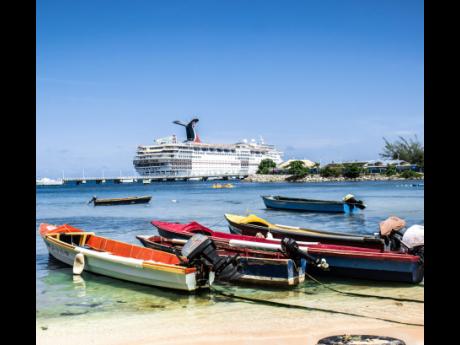 The small fishing canoes that the fishermen use to catch fish daily are docked at the seaside in Ocho Rios, while a cruise ship sits in the backaground. The ongoing transformation of the Ocho Rios Fishing Village is partly meant to position the facility as an eatery that can draw tourism business. 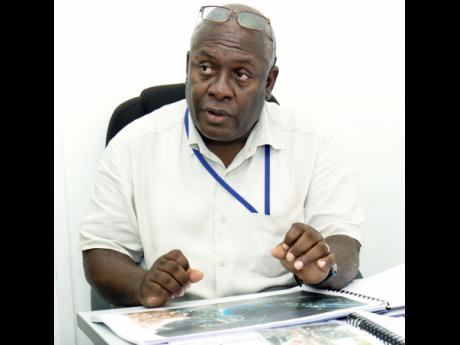 The Port Authority of Jamaica says it is well on track to upgrade and transform the Ocho Rios Fishing Village in the parish of St Ann into a modern facility.

The first of two phases is on schedule to be completed by December.

According to Leonard Bailey, senior civil engineer and procurement specialist at the Port Authority, work on the $220-million project will intensify in the coming weeks with the hope of coinciding with the start of the winter tourist season, which starts on December 15.

"For expediency, we have divided the project into two phases," said Bailey on a visit to the site on Wednesday. "This way, we can meet our targeted deadline and get things started."

He said the new facility, to be managed by the Port Authority, will boost the business opportunities for local fishermen and other operators, and where visitors will be also able to enjoy local culture and freshly caught seafood.

The upgrades to the village include construction of 14 shops and four restaurants, as well as a special area for local fishers. The majority of the shops will be selling local souvenir items, while the rest will be leased out as small bars, Bailey said.

The redevelopment of what was formerly called the Sailor's Hole Fishing Village is part of a tourism-related transformation plan for Ocho Rios, which includes the Reynolds Pier and the cruise terminal, and the sidewalks from the piers leading into Main Street.

It also comes following a tripartite agreement signed last November between the UDC, the Port Authority, and the Sailor's Hole Fishermen Benevolent Society for the complete transformation of the fishing village.

The Urban Development Corporation, the registered owner of the land which the fishermen had occupied for decades, transferred ownership rights to the Port Authority, signalling the go-ahead for what the agency termed "upscale facilities and right of access to the fisherfolk to a modern fishing bay tourism environment."

"The complex will also include a jetty for storage of fishing boats, lockers for storage, facilities for the scaling and gutting of fish and disposal of water used in the process, and also facilities for vending fish, and sanitary conveniences," Bailey added.

He said the village would not only be comparable to other modern facilities in the Caribbean, but is expected to significantly boost the tourism fortunes of Ocho Rios, making the resort town a first-choice destination for travellers.

"What you will see when we are through is a modern facility with sufficient parking. The aesthetics will be much improved ... an ambience to die for," said Bailey.

"We will also have a stream that runs through the property and which will be properly maintained. This will be a feature of the entire fishing village. In addition, there will be a promenade that will take you from the Reynolds Pier through the fishing village, through neighbouring Island Village, and right into the town of Ocho Rios," he told Gleaner Business.

President of the Sailor's Hole Benevolent Society Orville Grant says he is confident the redevelopment will re-establish Ocho Rios as a premier port of call, giving the fishermen and other business operators the opportunity to earn much-needed foreign exchange.

"We as fishermen do welcome this initiative by the Port Authority," he said. "They have kept their word every step of the way and they have included us in all the discussions, and we have been privy to all the plans," said the fisherman.

"This is a step in the right direction and Ocho Rios, and by extension, Jamaica, can only benefit."