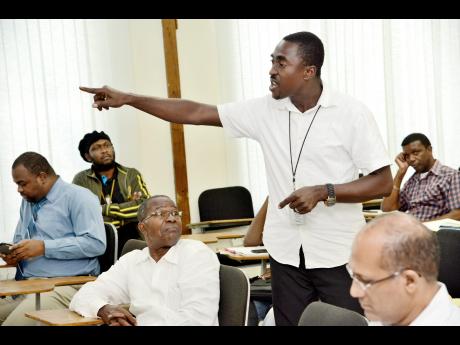 Trade unionist Danny Roberts is encouraging public-sector workers and others to find a way to minimise the need for the contentious and adversarial debate that normally accompanies the collective-bargaining process.

"This afternoon, we are commencing what we really want to be a conversation of a different kind, and that has to do with how do we treat with what is an obviously contentious, if not conflictual, situation between expectations on the part of

public sector workers and the realities of our economic situation," said Roberts at a forum hosted by the Hugh Lawson Shearer Trade Union Institute on Thursday.

Roberts is a 20-year veteran of the trade-union movement and head of the located on the Mona campus, University of the West Indies.

Referring to the new standby agreement between Jamaica and the International Monetary Fund, the union leader said the most notable for public sector workers was the IMF's insistence this time around that the wage bill be reduced to nine per cent of gross domestic product to free up more resources to invest in productive capital projects to boost growth. That structural benchmark has been pushed back to 2018/19.

State Minister for Finance Fayval Williams, one of the panelists at the forum, noted some of the objectives under the SBA have to be achieved "while we are transforming the public sector to be more efficient and delivery focused".

Williams said that when public sector workers hear the words 'efficiency' and 'transformation' they should open their minds to seeking out opportunities that could exist in terms of jobs in the private sector.

Roberts said public sector workers and their unions will contend they have been told for more than five or six years that there needs to be sacrifice on the part of all the sectors in society, at the end of which life should be better for them.

At the end of the extended fund facility - which was expected to run until March 2017 but will be overtaken by the SBA around November this year if the IMF board signs off on it - Roberts said public-sector workers had been expecting no further freeze on their wages and a more than modest increase in pay.

Instead, "we hear about public- sector transformation, which comes with its own set of issues and consequences", said the trade unionist, noting Prime Minister Andrew Holness' recent hint that it could result in possible lay-offs in the public sector.

"So public-sector workers feel themselves now caught in a dilemma between a rock and a hard place. On the one hand, a limitation on wages because the economy is not growing yet as fast as it ought to, and two, a public-sector transformation which has very credible objectives, but which appears to have negative consequential impact for public-sector workers," Roberts said

That kind of scenario provides the backdrop against which negotiations for a new round of wage settlement has to take place, he said, adding that there are already utterances from public-sector workers that they would not agree to another wage freeze.

"And already, you begin to get a build-up of the kind of ferocity with which they are planning to approach this coming set of wage talks, but truth be told, when you look at the macroeconomic figures, the economy is not yet in a position to meet the kind of expectations I'm hearing from

To avoid roadblock in the upcoming wage talks, he said the parties first need to get on the same page in their understanding of the issues at stake.

"The conversation has to be reframed," he said, to create a new paradigm for dialogue that "minimises the need for the contentious, adversarial, acrimonious debate that normally accompanies our collective-bargaining process, particularly under circumstances like these, and try to see if we can find a new path that begins to address the problem."