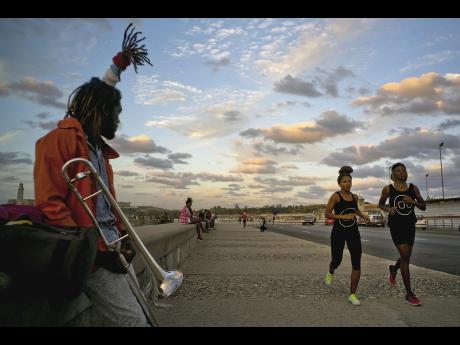 AP
In this January 30, 2017 photo, a man watches as boxers Idamerys Moreno, second right, and Legnis Cala, right, run along Havana's Malecon, in Cuba. The sun is setting on the Castro era. President Raul Castro previously announced he would soon be stepping down from office, making way for a new successor to be chosen.

In just under a year's time, if President Ra?l Castro keeps to his previously announced timetable, he will step down and cease to lead Cuba's Council of State and Council of Ministers.

Others in his generation are also expected to demit office.

Unless a constitutional change occurs, he will also cease to be the commander in chief of the Cuban armed forces. However, it is not clear whether he and other historic figures still active in the leadership will continue to lead or play a central role in the Cuban Communist Party.

To achieve all of this, several far-reaching announcements will have to be made in the coming months about the country's future leadership, constitution, and possibly, based on previous thinking, electoral reform. Despite this, there have, so far, been no formal indications as to when this will happen or exactly what the process will involve.

It is suggested that Miguel Diaz-Canel, the first vice-president of Council of State and the Council of Ministers will assume the leadership.

Over the last year, he has travelled widely and been warmly welcomed in Africa, China, India and Vietnam and to Russia and Venezuela which he has visited frequently. He has also participated in recent months in several important and sometimes challenging national debates in Cuba with young communists at universities and with the media. And he has been a regular visitor to the country's provinces, meeting workers and others.

However, on January 2, on the occasion of the youth-dominated celebration of the 59th anniversary of the Cuban RevolutiÛn, it was notable that the political address in the Plaza de la Revolucion was delivered by Jennifer Bello MartÌnez, the president of the Federation of University Students (FEU), who is also a member the Council of State. Then, Bello spoke about domestic and international issues, with President Castro presiding.

Notwithstanding, whoever succeeds President Castro, who is now 85, will have to be seen by Cubans of all ages as having political legitimacy, and the same moral authority, respect, and the personal characteristics of those who fought in the Cuban revolution. Just as importantly, they will need to be seen as genuinely representative of Cuba's new, educated, more diverse, freethinking and nationalistic young people.

Speaking on April 3 to the Cuban media, the first secretary of its Young Communist League (UJC), Susely Morfa Gonz·lez, said that the organisation she leads is now seeking to represent all Cuban youth.

Morfa, who has rapidly emerged as one of several younger national political figures in Cuba and who recently became a member of the country's Council of State, made clear that in order to respond to the challenges facing the country, the UJC wants "to motivate new generations to learn more about Cuba's history in a more inclusive, humane, and creative way".

Speaking about Cuba's almost three million young people - defined in Cuba as being between 15 and 34 - Morfa said that the organisation she leads will continue to strengthen its political role.

"We must continue to ... strengthen the functioning of our grass-roots committees and to encourage youths to take on leadership roles," she said.

She also noted that the UJC intends supporting young private-sector workers to explain to them their rights and "to fortify their patriotism". Cuba's youth "is the continuation of the generation that founded the Revolution, not its substitute," Morfa said.

What all this seems to suggest is that while preparations for generational change are under way, caution prevails, and the completion of the process may require the public emergence of a diverse group of younger leaders with charisma and managerial ability.

Irrespective, it appears likely that the transition is also being constrained by other uncertainties.

Externally, Cuba will not know for some time yet the outcome of the policy review currently under way in Washington; its planning process is being impacted by the rapidly deteriorating internal situation in Venezuela; and following an abrupt change in US rhetoric on Russia, Havana may need to incorporate into its thinking the possibility of a new form of cold war.

Internally, the uncertainties include a poorly performing economy and a possibly lengthy period of economic austerity; unresolved differences between conservatives and reformers about further economic reform; the rapid growth of small entrepreneurs and non-state co-operatives; widespread related concern about income inequality and inflation; a desire for a wider range of freedoms among the young; and a belated recognition that if the Communist Party and mass organisations are to remain relevant to the changed thinking of young people, they have to adapt rapidly.

All are issues that require leadership, authority, and experience if they are to be successfully addressed and resolved.

A further, more profound indication of the difficulties facing Cuba in achieving generational change was contained in remarks made on March 20 in Cuba's flagship television discussion programme Mesa Redonda.

Then, JulÌo Garcia Oliveras, one of Cuba's historic generation who fought in the Revolution, speaking about his life, the lessons learnt, and Cuban history, said: "We are now in a stage of change, and youth need to master all these experiences and be clear (about) the problem of unity, with which we have defeated all the manoeuvres of the enemy. If we divide (among) ourselves, we are lost in a world totally contrary to a socialist revolution ... I live clinging to the concept of unity as the most important concept on which young people have to reflect."

He went on to observe that while everything can be discussed, a single sense of purpose will need to be internalised.

Before long, Cuba's leadership will have to clarify to the Cuban people how generational change will occur and what and who will be involved.

The process is meant to be complete by the time of the next Cuban Communist Party Congress in 2021. It is likely to be challenging.