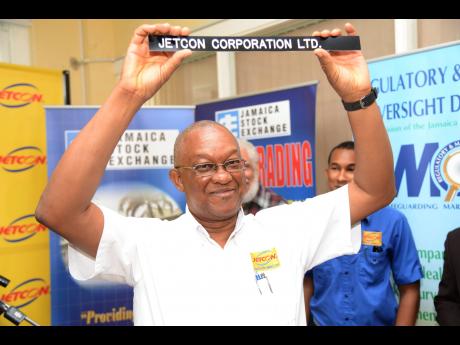 Jermaine Barnaby
In this March 24, 2016 photo, Managing Director Andrew Jackson celebrates the listing of Jetcon Corporation, at the Jamaica Stock Exchange in Kingston.

Listed pre-owned auto dealer Jetcon Corporation is looking to expand to maximise on last year's bull run that has carried over into the company's first quarter of this year.

Jetcon grew revenues by 75 per cent to $258 million in the March quarter. Business has spiked consistently for the company since it went public a year ago via the junior stock market.

Consequently, the company is considering expansion in Kingston. Its medium-term plans include expanding further outside the capital.

Inventory of motor vehicles and parts more than doubled since March 2016 and is up by $51 million since December to reach $292 million. Jetcon says it has boosted inventories in a deliberate strategy to both increase choice for customers and sales.

"We're coming up to a peak period at which time that cash will be used up by reconverting to more inventories. There is a peak in the summer and another in December, so we have to prepare for that," Jackson said.

At the same time, Jackson says space at its Sandringham Avenue base of operation is at capacity, which means Jetcon would have to expand.

"We're looking at various options to include the acquisition of another venue. This, of course, will accommodate the sort of volumes that we think we can bring to the market. We're actively looking at it, but we haven't found it yet," Jackson said.

He declined to speak to the level of investment being contemplated, and the timeline, but said there was no doubt it would happen.

"The possibilities are very real, but we can't say too much about that right now," he said, but confirmed the immediate plan is for expansion within the confines of Kingston.

"The expansion that we're talking about would really speak to Kingston in the short run. What we want to do is to consolidate our position in this geographical area first before we look at the rest of Jamaica, which would be a more medium-term consideration," the Jetcon CEO said.

Jetcon tripled its first-quarter profit from $11.5 million to $37.3 million.

Its stock price has also tripled year to date to $14.50, but has traded as high as $15.38. Company shareholders will vote on a plan for a three-for-one stock split at their annual meeting on June 14, which will increase its issued shares to 583.5 million units. They will also vote for a four-way split of the authorised shares to 1.2 billion shares of no par value.

Jackson says the split is one way of keeping trading active and the stock price affordable.

"We want to keep the price per unit in the single digit. We feel that it is more attractive there, especially as it relates to the junior stock market, where we want to keep small investors engaged," Jackson said.

He adds that the company has come a long way from the time when its presence on the capital markets was met with surprise. It's the only auto dealer ever to go public in Jamaica.

"Our investors deserve thanks for keeping faith with us. When we started the journey, everyone was a little surprised, but now that the results are there, what we want to do is to continue to increase shareholder value in the coming weeks and well on into the coming years," he said.

The Jamaican Government recently opened up opportunities for suppliers of pre-owned vehicles to state security services and other agencies, but Jetcon has not gone after any that business and has no immediate plans to do so.

"We're not betting on that too much," Jackson said. "Yes, if the opportunity arises, we will put in a presence, but we want to stick to the consumer market," the Jetcon CEO said of immediate plans.

Jetcon went public 25 years after its founding in 1991.