Cedric Stephens | Prosecution the best remedy in some motor accidents 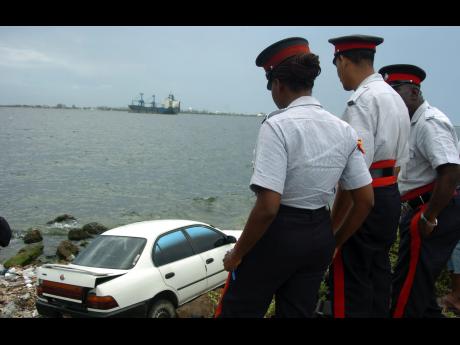 Ian Allen
In this June 2006 photo, police officers look at a vehicle at the scene of an accident. Criminal prosecution may be the best means to push for a remedy for some accident victims, where insurers fail to pursue claims by policyholders.

QUESTION: On March 3, 2016, I was driving my Toyota RAV4 along the Mavis Bank Road and stopped to pick up a passenger. After driving off, I saw a yellow Toyota Hiace truck ahead of me. It started to reverse and so I stopped and blew the horn to alert the driver. In spite of the persistent blowing, it continued to reverse and collided with the front of my car. Both headlamps, the bumper, bonnet, cooling components, radiator support panel and front bumper reinforcement were damaged. I determined the names and addresses of the truck owner and driver.

The vehicle was insured but did not include the person who was driving. As a result, the owner's insurer has not paid my claim. The truck owner has refused to take responsibility for the accident. My insurers have tried to help without any success. They told me that I will be on my own if they do not get a response from the owner by August 2017. That attitude appears to be inappropriate. I am up-to-date with my insurance payments. What should I do in order to get this matter resolved?

INSURANCE HELPLINE: I am very sorry to learn about your experiences over the last 14 months. The 'bad guys' in this story are not the insurance companies. Rather, they are the truck driver and the owner of the Toyota Hiace. The former for his carelessness. He allowed the vehicle that was under his control to hit yours. In addition, his actions after the accident suggest non-acceptance of the financial effects of the collision.

The Toyota Hiace owner is wicked. He wants you to pay for the repairs to your vehicle and assume the costs and inconvenience of being without a vehicle while it is being fixed. Meanwhile, he and the driver continue to operate as if the collision did not happen or as if you were to blame.

He appears to have bought motor insurance that he did not understand, or entrusted his vehicle to another driver without thinking about what would happen if an accident occurred. It is quite clear that he is not a responsible citizen.

I find it very surprising that although you, the driver and truck owner probably live near to each other in the coffee farming community of Mavis Bank in east rural St Andrew, population about 2,000 persons, none of these two guys have had the decency to approach you directly to settle your claim.

The Jamaica Information Service says that the Ministry of Justice "is increasing the use of non-court initiatives, including mediation and restorative justice practices" to resolve conflicts.

Restorative justice is a process where all the parties with a stake in a particular offence come together to resolve collectively how to deal with the aftermath of the offence. Could these principles help to resolve your dispute? Frankly, I do not see how they could help when the truck driver and the owner are acting as if the accident did not happen.

Section 4(1) of the Motor Vehicles Insurance (Third-Party Risks) Act reads: "It shall not be lawful for any person to use, or to cause or permit any other person to use a motor vehicle on a road, unless there is in force in relation to the user of the vehicle by that person or that other person, as the case may be, such a policy of insurance or such a security in respect of third-party risks as complies with the requirements of this Act."

The intention of Section 4(1) is crystal clear. Owners and drivers of vehicles can both be prosecuted if it can be shown that the vehicles were not insured as required by law when the accident occurred.

Evidence of non-compliance could take the form of a letter from the third party insurer stating that the driver was not insured when the accident occurred.

The police generally assume that presentation of a certificate of insurance or a cover note is evidence of coverage. This is often not the case. Decisions about whether insurance is actually in force, "in relation to the user of the vehicle", as required by law, are made by insurance company officials several days after the police have examined the certificates or cover notes.

The police could therefore bring criminal charges against the owner and driver of the Toyota Hiace under Section 4(1) of the Act. The threat of criminal prosecution by the police could be used as leverage to get them to take action to settle your claim against them.

May I suggest, therefore, that you seek the help of the police and a Justice of the Peace to resolve the matter. In case that this approach does not work, your Plan B will be to seek legal remedy.

Finally, your insurer is in the insurance-selling business and not in the business of advice-giving!