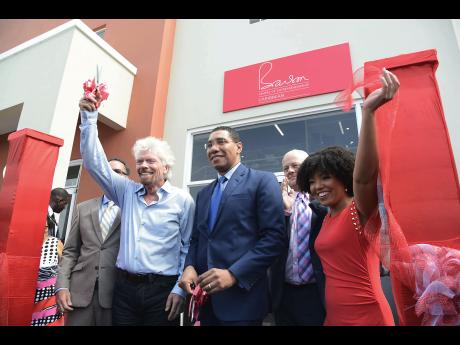 Rudolph Brown
The Branson Centre for Entrepreneurship has relocated from Montego Bay to Sovereign Commercial Centre in Kingston. Prime Minister Andrew Holness is flanked by philanthropist and Virgin Group Chairman Sir Richard Branson and CEO of the Branson Centre Lisandra Rickards at the ribbon-cutting ceremony to declare the facility officially open for business on Tuesday, June 6.

The Branson Centre of Entrepreneurship, which trains start-up businesses, plans to widen its scope to include investing in medium-sized companies financed by Proven Investments Limited and other supporting entities.

It shifts the centre from an incubator to a business accelerator, Proven Group CEO Christopher Williams said. And it comes as the centre relocates from the resort city of Montego Bay to Jamaica's industrial and commercial capital, Kingston.

"The accelerator model will take existing businesses and help them explode into large businesses by providing governance from the Branson Centre and capital from Proven along with other partners," Williams told Gleaner Business ahead of Tuesday's ceremonies.

Proven will take the lead with the support of PanJam Investment, GraceKennedy, NCB Capital Markets, Norbrook Capital, along with two or three private individuals.

"We were approached by the Branson Centre and we thought it was a good idea, but we could not do it by ourselves, so we got the partners to join. The more the merrier," Williams intoned.

Proven under this project wants to finance medium-sized companies, typically family-owned, that have done well locally but are looking to expand internationally.

"We are constantly looking for deals but the problem is scale. Few in Jamaica have done it," said the Proven CEO. "There's Patrick Casserly, Butch Stewart and Levi Roots they took the Caribbean's natural resource and turned it into a global product. And we think the Branson Centre can do it for other companies," he said.

The type of financing, whether debt or equity or a combination, is up for internal discussion.

"This is a watershed moment for entrepreneurship in the Caribbean," Williams asserted.

The Branson Centre, which is named for founder and billionaire investor Sir Richard Branson of the Virgin Group, moved to Kingston in order to be more accessible to its clients, of which 70 per cent live within the capital city. The centre was established in 2011 as a non-profit that supports community development through building stronger businesses.

"Branson Centre is moving to Kingston so that we can be more accessible to our entrepreneurs, collaborate more deeply with partners and generate greater impact overall," said Branson Centre chief entrepreneurship officer Lisandra Rickards. "We'll still be servicing the wider Jamaica, but our Caribbean headquarters will benefit from closer proximity to the dynamic start-up scene in the capital, and add value as a lead player in the entrepreneurship development."

The major sponsor is Virgin Unite, which aims to provide the centre with some US$2 million over a decade.

Last year, Proven Investments attempted an ambitious programme aimed at identifying ventures in which it could invest. The Jamaican company invited 100 start-up companies in Jamaica and other countries in the English-speaking Caribbean to pitch for private equity funding, but none of the respondents met Proven's investment threshold and it suspended that project.

Proven Investments is a private equity management company whose investments include companies with assets well over US$600 million, including a banking outfit it recently acquired in St Lucia.