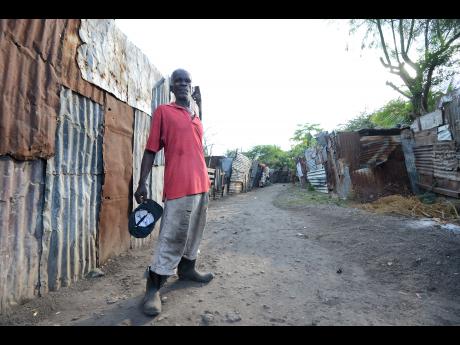 Ricardo Makyn
The poverty stricken community of Coconut Walk in Kingston is ringed by rusting zinc fences. Terence Ferguson, a 75-year-old resident, stands in the lane of the community that is targeted by the poverty alleviation programme that the current Holness administration is attempting to develop.

A new UNDP report, which puts Jamaica's per capita income at US$8,350, finds that 406,000 of its citizens live either near or in extreme poverty.

The newly released United Nations Development Programme annual report on Jamaica for 2016, estimates the poverty rate among the country's 2.8 million people at 14.5 per cent, but found that the majority of them, an estimated 268,800 people, live close to the poverty line.

The report ranks Jamaica at 94 out of 188 countries on the UNDP human development index, which assesses health, education and standard of living.

The human development report-derived rates do not describe Jamaica's overall poverty rate but specific measures based on purchasing power parity, that is, the percentage of the population living below US$1.90 per day.

The Planning Institute of Jamaica (PIOJ), which is spearheading a national poverty-reduction programme launched earlier this year, told the Financial Gleaner that the most recent data on poverty published by Jamaica show the individual poverty rate was 20 per cent in 2014.

The PIOJ makes a distinction between the individual and the household poverty rate. The latter was estimated at 13.6 per cent in the 2014 survey conducted by the Statistical Institute of Jamaica and analysed by the PIOJ.

The Planning Institute said that while Jamaica's assessment of its poverty rate is consumption-based, different international agencies might use different methodologies, such as the US$1.90/day income threshold, as the basis for their estimate.

According to the World Bank, researchers have been trying to assess the extent of extreme poverty since 1979 and more so since the World Development Report in 1990, which introduced the US$1/day international poverty line. That line has risen over the years to US$1.25, and since 2015 to US$1.90.

The idea was to measure income poverty with respect to a line which reflects the standards of absolute poverty in the world's poorest countries and corresponded to the same real level of well-being in all countries.

The PIOJ noted that a number of different methods seemed to have been used by the UNDP, but Jamaica does not use the international income method to arrive at the national poverty rate.

Moreover, it said, generally speaking, countries' individual poverty rates are not comparable; and given that income data is technically very difficult to come by in Jamaica, PIOJ does not consider it a reliable measure for Jamaica's poverty estimate.