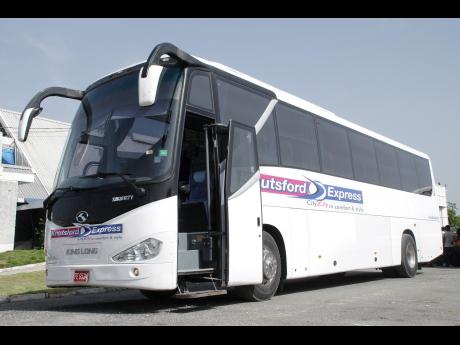 It comes amid the soft launch in August of its new depot at Sangster International Airport (SIA) in Montego Bay.

"We are in discussions with a few airlines and other entities in terms of collaborating to increase passenger load," said CEO Oliver Townsend. "So there will be a slight increase in marketing going forward," he told the Financial Gleaner.

Townsend avoided details but indicated that airlines value the predictability that Knutsford Express could provide for travellers. There are between 70 to 80 aircraft landing daily at Sangster International, and the depot places the bus company in proximity to tourists, one of the key demographics it wants to grow.

Townsend explained that the new depot will allow Knutsford to shuttle passengers who arrive at the airport seamlessly to its 11 terminals across Jamaica.

Previously, arriving passengers would get shuttled to the main depot at Harbour Circle, Montego Bay, then onwards to their destination. That depot becomes problematic during periods of heavy traffic in the city. Also, it's an inconvenience for those who have to double-back past the airport to reach their destination.

"In recent times, there is a lot of traffic delays. So we are correcting an imperfect situation," said Townsend, who declined to reveal the cost of setting up the depot.

The Harbour Circle depot will remain open as it is convenient for passengers, particularly locals in the area, he said.

Knutsford Express spent $105 million on additions to property, plant and equipment for its financial year ending May, its newly released annual results show. Most of that capital expenditure, or $65 million, went to the acquisition of three buses, which brought its fleet of mostly buses to 40. During the year, Knutsford sold off two buses.

The luxury coach service made $170 million net profit for the year, off revenues of $753 million. Profit rose 39 per cent, while revenue climbed 29 per cent.

The company benefited from increased passengers since the opening of the North Coast Highway, which cut the commute time between Ocho Rios and Kingston. It allows for increased bus runs. Also, during the year, its new subsidiary launched in 2016, KE Connect Limited, offered more rentals to visitors and corporate executives.

Townsend remains bullish on the future prospects of the company, but avoided speculation on whether the double-digit rise in revenues would continue into the 2018 financial year.

"It is hard to answer that, but we are keeping pace with demand and we need to introduce new initiatives. But we are buoyant on the future," he said.

During the year, Knutsford Express approved a one-for-five stock split that resulted in an increase in the ordinary shares of the company from 100,000,003 shares to 500,000,015 shares. The bus company, which has traded on the junior market since January 2014 under the symbol KEX, has a market value of $7.45 billion.