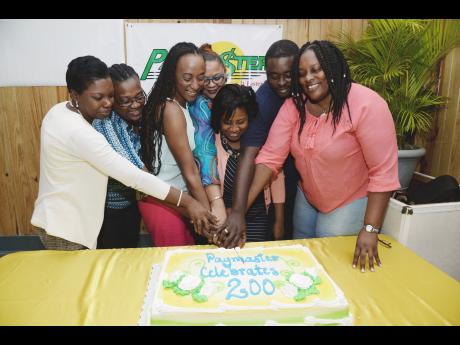 Jermaine Barnaby
In this March 18, 2017 photo, Paymaster Jamaica staff celebrate the opening of the companys 200th branch at an event held in Kingston. The Bill payment company is now at 202 branches and is making plans for more of them to offer remittance services.

Bill payment company Paymaster Jamaica Limited is bent on deepening its footprint in the remittance market, and is now looking towards its partnership with Lasco Financial Services to make it happen.

Paymaster General Manager G. Mike Fisher says the company, which has 202 agent networks, wants to grow the number of them that offer remittance services from the current 30.

"There are very few companies with as many locations. We do intend to open up more," he asserted, but did not disclose the target.

Remittances are Paymaster's second-largest source of revenue, behind utility bill payments, and most remittance payouts at its agent windows are for MoneyGram trans-actions, Fisher said.

Jacinth Hall-Tracey, the managing director of Lasco Financial Services Limited, said her team had been approached by Paymaster to add more outlets, while noting that new locations will have to be approved by the Bank of Jamaica, which regulates the remittance market.

Altogether, Lasco has 130 MoneyGram sub-agents, inclusive of those operated by Paymaster.

Sub-agents seeking entry as remittance providers will have to apply through an agent, which will then seek BOJ approval, Hall Tracey outlined.

MoneyGram has four agents in Jamaica - Lasco, which is also agent in The Bahamas; Jamaica National; Victoria Mutual Building Society; and Alliance Remittance - and an estimated 20 per cent share of the market.

Western Union partner GraceKennedy is estimated to be the dominant player with around 50 per cent market share.

Fisher said payment services all together grew by 58 per cent since November 2015 when Paymaster was acquired by telecommunications giant Digicel for an undisclosed sum.

Digicel Group purchased a majority interest in the company founded by Ambassador Audrey Marks. Marks said then that Paymaster would capitalise on strategic opportunities, particularly in the areas of online and mobile-based payments.

At the time of its acquisition, Paymaster had 170 shops in its agent network and claimed more than 40,000 distribution points in the United States and Canada.

Its local agent network has grown nearly 20 per cent since then.

"We serve the public from 202 locations islandwide. We continue to record strong performance in utility bill payments, remittances and mobile top-ups as evidence of customers' growing preference for Paymaster as their place of choice for these services," Fisher said.

"We have seen approximately 58 per cent growth in processing throughput since November 2015, as per the BOJ industry report. We recorded the fastest level of growth in remittances," he said.

Since 2015, Paymaster has also expanded its payment services, adding Magna loyalty rewards programme, Sagicor Sigma and Courts Finance. The Paymaster website lists 105 companies and organisations for which it makes and collects payments, including the United States Embassy.

Fisher declined to comment on the company's turnover, but said the expansion is meant to grow clientele and revenue.

"Paymaster, as part of normal business operations, continues to look for growth areas to expand and deliver additional convenience to both clients and customers. Like any other business, we do assess our human resource needs to fit the growth strategy," he said.

He noted that since the acquisition, Paymaster has "received working capital support, bolstered by robust strategic planning support" from the Digicel Group, which "complements the long-standing Paymaster team who continue to manage the company's operations," the GM said.