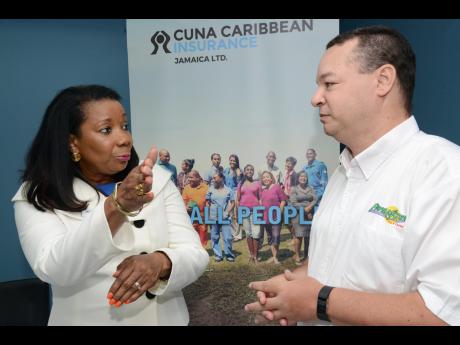 Rudolph Brown
Lana Forbes, vice president for sales, products and branding at CUNA Caribbean Insurance Jamaica, speaks with Michael Fisher, general manager of Paymaster Jamaica, at the signing of a partnership agreement between their companies, at CUNA Caribbeans offices at the CWJ Building, 51 Half Way Tree Road, Kingston on Thursday, August 17, 2017.

The move seeks to make payment easier for the estimated 100,000 CUNA Jamaica customers. There are currently under 50 locations where CUNA customers can pay. Come Monday, however, Paymaster locations will increase that number to nearly 200 along with online payment. CUNA never had online payment prior to the deal.

"We are looking at ways to make life a little easier to our customers," Lana Forbes, vice-president of sales, product and branding, CUNA Jamaica, said in a Financial Gleaner interview immediately following the signing ceremony at the CWJ Building in Kingston on Thursday. "Without us having to spend the time and effort to build an online portal, we have done it by just joining forces with Paymaster," Forbes said.

Paymaster provides payment services to over 100 companies. It was founded by Ambassador Audrey Marks and acquired by Digicel in 2015.

"It could be significant. In terms of success factor, it could be 5.0 per cent of our volume growth on our current business," said Michael Fisher, general manager at Paymaster, at the signing ceremony. "It gives CUNA a branch network of nearly 200 for it to sell products," he said.

Customers will pay $55 per transaction, but Fisher reasoned that it would be cheaper than travelling to the narrower payment windows that preceded the deal. The fee is partially covered by CUNA and the customer.

"When we speak of con-venience, we mean accessing any of the 150 Paymaster locations across Jamaica or pay premium online," stated Fisher in his speaking address. "If, before, you lived in Brown's Town and you had to travel to Ocho Rios, then now it's more convenient and cheaper."

CUNA Caribbean is a member of the CUNA Mutual Group based in North America. The country operation provides insurance solutions for credit unions and their members. The parent company holds US$18.5 billion in assets.