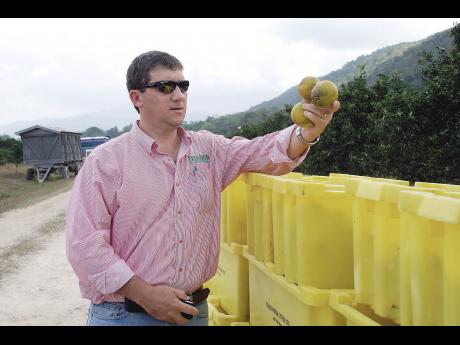 File
In this 2010 Gleaner photo, Managing Director Peter McConnell holds up oranges reaped from Trade Winds Citrus' orchards at Bog Walk, St Catherine. Then the company was producing its own concentrate for its juice plant, but in 2017 Trade Winds is selling its fresh fruit and importing concentrate. 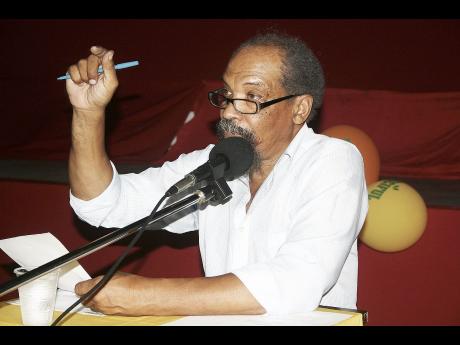 Citrus sellers are now enjoying premium price on the fresh fruit market because of shortages created by disease.

“Most of the fruit is going into fresh fruit sales. Higglers come to the farm gate and pay top price,” Miller told the Financial Gleaner amid reports that supplies are spotty and beverage manufacturers have been utilising more imported concentrate.

Additionally, domestic demand has found itself in competition with export markets as some producers take advantage of world prices for fresh fruit.

The processing of local fresh fruit into beverages continues to decline as the citrus industry struggles to revive from the citrus tristeza virus and greening diseases, which have cut national production by more than half since the year 2000.

Miller said, in 2000, when local production was at its peak, Jamaican farms produced 4.7 million boxes of which Valencia sweet oranges accounted for over two million boxes.

Grapefruit was half-million boxes and limes and other varieties accounted for the rest.Local production, he said, is now under two million boxes overall, and it’s mostly sweet oranges.

“Ortanique, grapefruit, lime ­ everything has taken a hit,” Miller said.

“At under two million boxes, there is not enough processing fruit available to keep two factories going. So there is only one factory which processes the fresh fruit now and its Trade Winds, which has a captive supply,” said the JCGA director.

Efforts to confirm the status of Jamaica Beverages’ processing operations were unsuccessful up to press time. The company is restructuring under bankruptcy protection.

“Now that production has fallen to the extent it has, no way farmers will overlook the top dollar of the fresh fruit market and send to the factory,” he said.

His position is backed up by Peter McConnell, the managing director of juice manufacturer Trade Winds Citrus, who told the Financial Gleaner the fresh fruit market is his company’s priority.

Trade Winds operates its own orchards in St Catherine. And the company is now selling fruit not only domestically, but to foreign markets as well.

“Crisis creates opportunity. The citrus industry is in crisis. Supplies are low but prices are high, so there is opportunity,” said McConnell. “TWCL is investing in sustaining our existing groves and planting new ones.”

The beverage maker says he is using more frozen concentrated orange juice, FCOJ, to process his drinks sold under different brands that include Tru-Juice and Wakefield. Still, not all of Trade Winds juices are citrus-based ­ its flavours span a range of fruits as well as vegetables.

FCOJ futures are trading at around US$1.40 per pound on the international market.

The high cost of concentrate has narrowed the company’s margins, but not necessarily its price competitiveness.

“We are dependent on imports from Belize to supplement shortfall in local production. Based on the high cost of FCOJ on the world market, our margins are negatively affected, but all juice manufacturers are in the same situation," McConnell said. "Seven years ago, we had excess and were seeking market for our concentrate. Now it's completely reversed."

Imported citrus amounted to US$1.8 million in 2016 for Jamaica, according to world trade data produced by the United Nations. Only processed citrus juice and dried concentrate are allowed into Jamaica.

"We are still able to supply the local fresh fruit market without a problem, but the amount needed for our juices - we don't have enough - so we are using a blend of our oranges and imported concentrate," McConnell said.

"We are exporting fresh fruit to the Caribbean because the prices are very good; but any of the more competitive markets, we are not bothering with that. We are concentrating on the markets where we get the best returns," he said.

Miller of the JCGA said that when fruit is sold to the factory, farmers now fetch about $110 per pound. The farmer is therefore being paid between $500 and $700 per box at the factory gate, depending on juice quality.

Comparatively, "higglers come right to the farm gate and buy fruit for $2,000 to $3,000 a box," he said. "Of the three markets for citrus, the most profitable is fresh fruit sold at $200 per dozen. Right away, the higgler is grossing $3,000 per box. A box of fruit contains, on average, 15 dozen oranges." Higgler is another term for informal vendor.

"If the farmer sells the same fruit to the factory, he gets $700. You can't compete," Miller concluded.

Trade Winds is the largest citrus farmer in Jamaica, cultivating approximately 2,700 acres of citrus groves on four farms. The company grows Valencia and Parson Brown oranges, pineapples, ortaniques and limes. The traditional harvesting period is from November through June each year and the yield from mature groves averages 350 boxes per acre.

McConnell said the company has begun a replanting programme, and is feeling its way forward as it responds to the dynamics of the market.

"We have started replanting citrus for the first time in six years by putting in a 15-acre block of irrigated citrus this year," he said.

"Once we have seen these trees start to produce - in the next three years - and we are satisfied with the productivity, we will embark on a massive planting programme to replant more than 2,000 acres."

He said the volume of fresh fruit handled at Trade Winds' packing house and juice plant has continued to decline and the supply of fresh fruit for processing has fallen by at least 50 per cent over the last four years.

Dr Miller noted that Jamaica Beverages ceased processing local fruit in 2016, saying they were only able to get a fraction of their needs.

"It's like hiring a 20-tonne truck to carry two tonnes only," the JCGA director said.