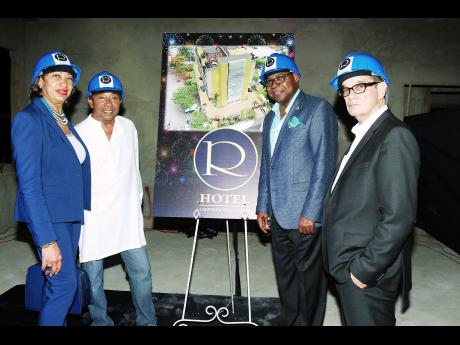 A mounted display of the R Hotel is flanked by, from left, Jampro President Diane Edwards, architect and co-partner Evan Williams, Minister of Tourism Edmund Bartlett and co-partner Joe Bogdanovich.

​Evan Williams plans to open a new Redbones Blues Cafe at the R, an ongoing development on the cusp of New Kingston on which he is partnering with Joe Bogdanovich.

The property is being developed as a hotel, but its 48 residential units will all be sold to individual investors. Three realty and property companies have been hired to market the units - Sagicor Property Services, Coldwell Banker Jamaica and Re/Max Jamaica.

"I selected three real estate brokers and I gave them a certain number of keys to sell. They will bring in those buyers and once they are on board, those owners will enter into a property management agreement with us. Those rooms will be part of a pool which we will, in turn, rent as part of a hotel," Williams said.

The business he describes sounds like a timeshare arrangement, but Williams said it was not.

Redbones is expected to open at the same time the R hotel launches into operation near the end of the year.

The R is supposed to open for business in November, a month behind schedule, and one of the realtors is reporting that sale of the units is picking up after initial reluctance.

"When last I checked, the penthouse units were almost all gone," said Josephine Harris of Sagicor Property. "We as Jamaicans are known to buy into projects when we can see and feel and touch a finished structure so when it is finished I anticipate that there will be a rush for what's left of those units, and I can assure you that there will be not much left to sell," Harris said.

Williams showed off one of the units two weeks ago, which he believes led to the uptick in interest.

The eight-storey R hotel incorporates a combination of exclusive rooms and suites targeted mainly at the travelling business executive. Prices for the units start at US$135,000 and range up to US$330,000.

Williams said Bogdanovich and other overseas interests have already taken eight of the 48 suites available. The other 40 are being marketed by the three realtors.

Owners get to stay in their units for a small period each year. The R will be managed by Renfrew Property Management Limited, a company that Williams set up.

"It's not a timeshare arrangement because there is no other facility that is involved," said Williams. "As an owner, after buying your unit you can stay there free for up to one week per year. If you want to stay there longer, depending on how long that is, the rate is negotiated."

Investors are being sold the prospect - but not the guarantee - of a return on their investment of seven per cent in year one, moving up incrementally on to a 10 per cent cap in year 10.

"It is not guaranteed, but it is based on income. For that, we are thinking of a minimum occupancy of 50 per cent, which works out to 24 keys," Williams said.

Meanwhile, Williams says he is weighing whether to add a second Redbones Cafe as the business prepares to celebrate 21 years of operation in two months time.

"It's either going to be one Redbones with a new image, and close the old one because it's time, or we'll have two Redbones. But we're assessing the situation; we're trying to put that together right now," he said.

He sees Redbones becoming a draw among locals to the R.