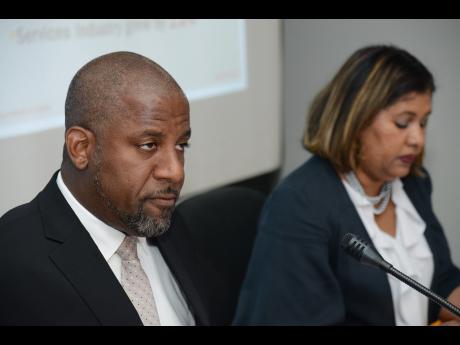 Rudolph Brown
Director General of the Planning Institute of Jamaica Dr Wayne Henry briefs the media on economic performance in the June quarter on Wednesday, August 30. Programme Director for the Vision 2030 Jamaica Secretariat Elizabeth Emanuel is at right.

​The economy expanded by 0.3 per cent during the quarter ending June, with the hotels and restaurants industries contributing the largest share, the Planning Institute of Jamaica, PIOJ, is reporting.

The out-turn largely reflected the positive impact of the continued strengthening of the global economy on some industries, including hotels and restaurants - the segment that captures tourism activity - which grew by eight per cent, and manufacture, which expanded by 2.4 per cent.

"However, further growth in the economy was stymied by the adverse weather conditions associated with flooding which occurred during the quarter," said PIOJ Director General Dr Wayne Henry said Wednesday.

"This negatively impacted the performance of the agriculture, forestry and fishing; mining and quarrying, and electricity and water supply industries," the director general said at his quarterly press briefing on the economy at the PIOJ offices in New Kingston.

Henry said the preliminary cost of damage and loss related to the heavy June rainfall which affected communities in Clarendon and other parishes was estimated at $4 billion or 0.2 per cent of 2016 GDP.

More than 80 per cent of that amount, or $3.3 billion, was for damage to public infrastructure, accounting for 77.6 per cent of the total, while the productive sector accounted for 20.1 per cent, he said.

The main areas of damage in the goods-producing industry were agriculture, forestry and fishing, totalling $814.9 million. Within services, the infrastructure-related industries were the main areas impacted, specifically roads and bridges, which incurred $3 billion in damage or 75 per cent of the total, as well as water supply and sanitation with losses of $105.8 million or 2.6 per cent of the total.

Henry said that during the review quarter, the goods-producing industry is estimated to have declined by 2.5 per cent and that was attributed to a decline in agriculture, forestry and fishing, and the mining and quarrying industries.

Agriculture, forestry and fishing declined by 8.5 per cent, largely reflecting the adverse weather conditions. This resulted in a decline on other agricultural crops, down 12 per cent, reflecting lower output for six of the nine crop groups. The main contributors were vegetables, down 18.3 per cent; fruits, down 11.2 per cent; and legumes, down 7.3 per cent.

Traditional export crops declined by 5.6 per cent, reflecting mainly lower production for sugar cane, down 37.4 per cent, and cocoa, down 75.9 per cent, while animal farming declined by 0.9 per cent.

The mining and quarrying industries contracted by 10.5 per cent. Total bauxite production fell by 10.2 per cent as a result of adverse weather conditions which prevented mining activities, as well as reduced demand from overseas aluminium refineries.

Growth in the manufacture industry was attributed to an increase in both the food, beverages and tobacco, and other manufacturing sub-industries.

Henry said inflation of 0.6 per cent was recorded in July 2017, an out-turn that reflected mainly higher indices for food and non-alcoholic beverages, up 1.2 per cent; and transport, up 0.3 per cent due mainly to increased prices for air fares during the summer travel season.

For July 2017, there were decreases of 17.8 per cent and 14.6 per cent in crude bauxite and alumina production, respectively. While alumina exports increased by 26.8 per cent for July, crude bauxite exports declined by 9.8 per cent.

The PIOJ is projecting real GDP growth within the range of one to two per cent for the quarter to September 2017.