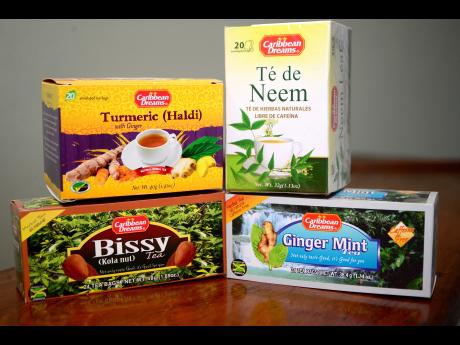 Jamaican Teas has tapped into a market niche in Trinidad & Tobago, having discovered that the Indian population are lovers of herbal teas.

The tea maker is developing targeted products to deepen its market penetration there, including a new tea made from basil leaves, which will be packaged as Tulsi - the name by which tea drinkers in the eastern Caribbean know the herb.

"We now have about 35 products under teas, but we recently launched some new products for the Trinidad market which are doing very well," said Jamaican Teas CEO John Mahfood.

"There is a large Indian community in Trinidad - half of the population - they like herbal teas; they are very into turmeric tea, neem and moringa." He said.

"These are the teas which are growing for us. Interestingly, they also drink cerasee, but they have a different name for it - cerraille. This was discovered recently when one of our shareholders, who is Indian, said in Trinidad, they drink a lot of cerasee, but they call it something else."

From there, Jamaican Teas decided to research whether there would be receptivity to the product.

"We added the name to the cerasee and all of a sudden, they started to buy it," he said.

Jamaica Teas claims the position of the largest manufacturer of teas in the Caribbean. It produces Tetley teas under licence, but also distributes its own brand called Caribbean Dreams.

Jamaicans, too, are lovers of cerasee tea, which is often home-brewed. The herb largely grows untended, presenting supply challenges for the manufacturer.

To support its export thrust, the company is seeking to whip up small farmer interest in supplying the herb - dried or green.

Currently, the root crop is imported as the ginger shortage in Jamaica is severe.

The tea maker, while noting his near 17-year presence in Trinidad, still described it as "the most difficult" Caribbean market.

"You have to be very good with the pricing to compete. It's a tough market to penetrate. We have been there since 2000. Finally, after 17 years, it is our biggest market, even though the population is half that of Jamaica." Mahfood said.

"It shows that with perseverance and research, exports can progress; it shows me that you have to do your research and visit your markets in order to get to know them."

For Jamaica Teas, Trinidad ranks about equal with New York in sales, often taking the number-one spot with about 20 per cent of exports. Florida rounds out the top three.

Exports for Jamaica Teas are 55 per cent of total sales.

"If we could get the cerasee, it would really improve the sales. With the ginger, we have to import it because we can't get it locally. We would prefer to get it locally because we want to support the farming community, even though I get it cheaper from China," Mahfood said.