Hotel to be built in Barbican 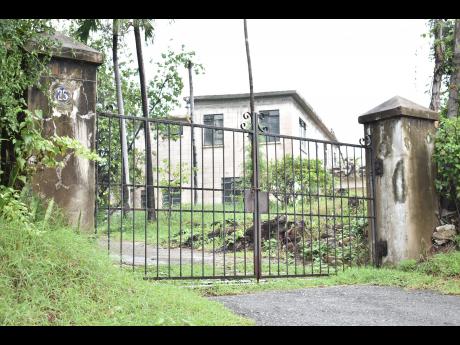 The property at 25 East King's House Road on which a hotel is to be built.

Architect Jeremy Millingen is part of a design team working on a new high-rise hotel that will overlook Barbican square, which itself is in the process of a transformation to bring better traffic flow management to the expanding commercial hub.

The roadwork, which have begun with the demolition of structures in the square to make way for wider roads and realignment of the traffic system, is already changing the look of the square.

The planned six-storey hotel would add a different type of business to an area that is largely populated by retailers, with a few offices in between, and would be one of the tallest edifices in the vicinity.

The hotel will be developed at 23-25 East Kings House Road. The property adjoins Barbican Centre, which is owned by the Loshusans, but the grocery family is said to have no part in the hotel project.

Millingen, the project engineer, held back on the identity of the hotel developer, but said it was being done in partnership between Jamaican and American interests.

The hotel will cater to a mix of clients, including business travellers and visiting Jamaicans. It would become the latest high rise in Kingston currently undergoing a redevelopment of its skyline. The complex is still in the design stages.

"It is a Jamaican and American joint venture," said Millingen. "It is proposed to have approximately 120 rooms," he said.

Titles Office documents show that the land was acquired by George Naim Habib in 2016 from Edward Charles Hanna.

The ornate stone house that sits on the property is being incorporated into the design of the hotel complex, which is aiming to project a mix of contemporary and old-world charm.

Millingen said it was up to the developers to comment on the investment to be made.

The National Environment and Planning Agency (NEPA) approved the hotel project earlier this year. Millingen said the hotel will have five floors above ground, while the sixth would be at basement level.

Talks are ongoing with the Loshusans to open up a gateway linking the hotel and Barbican Centre.

"One of the strengths of the development is the shopping plaza," said Millingen.

He affirmed that the Loshusans were not the developers, but declined to comment on whether it was Habib.

The Loshusans' Barbican Centre and Barbican Circle properties are held under the same company, Kenneth Loshusan & Sons, said a person with knowledge of the structure of the holdings. Ken Loshusan passed away six years ago.

Gleaner Business contacted a member of the family business, Gladstone Loshusan, for additional information on the gestating plans for Barbican Circle, but was referred to Bruce Loshusan, who was overseas and unreachable by Gleaner Business.

"That project is bigger than me," Gladstone Loshusan said.

It was always the consideration that the public road that splits Barbican Centre and the Barbican Circle property would be eliminated in the traffic redesign by National Works Agency.

Last week, the Loshusans were cleared to acquire more of Barbican Circle when the Kingston and St Andrew Municipal Corporation voted in favour of selling 29 East King's House Road to Kenneth Loshusan & Sons and Grant Marketing Company, signalling that the family was getting closer to executing plans for either the extension of Barbican Centre or development of a new commercial complex that has been talked about for at least seven years.

Barbican is an untested location for a hotel. Millingen said the joint venture developers are in talks with a few global hotel chains under whose brand the property hopes to operate.

"We think the hotel will work and we are talking to a few brands overseas," he said.

The hotel market in Kingston is expanding, with new projects like the 'R', 77 Knutsford, and PanJam's Caribbean Place under development. Millingen believes the Barbican hotel would still find its market given its juxtaposition with the busy plaza, and by flying the flag of a global hotel brand.

The majority of top hotels in Kingston are centralised in and around the business district of New Kingston.

UPDATE: This story has been updated to correct the name of the property to be sold to Kenneth Loshusan & Sons to 29 East King's House Road.