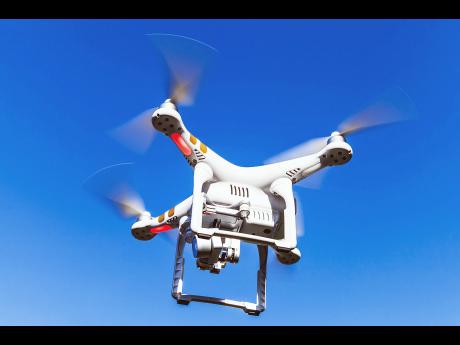 A drone controlled by wireless remote

The Jamaica Civil Aviation Authority, JCAA, expects an influx of drone imports to be handed out as gifts this holiday season.

But the agency has no means to track the precise number of these unmanned aerial vehicles, or UAVs, many of which are operated as toys, and therefore cannot fully monitor their use.

Its next best option, as regulator of the skies, is an awareness campaign about the limits on where drones can fly.

"We are coming to the festive season; we know persons will be buying a lot of presents, and quite a bit of these will be those toys for kids. And so, we will ramp up our public education programme on the use of drones and the no-fly zones," said JCAA director general Nari Williams-Singh at an aviation seminar in New Kingston on Wednesday.

"We will not be able to regulate every UAV down to the hobbyist, but we want to get the information out on the safe use of these toys," he said.

JCAA has been offering safety tips on drones since mid-2016, when it released its first flight-safety notifications.

"So it came as a concern to know that a drone flew over Petrojam oil refinery," said Williams-Singh, who also expressed concerns about flight over wide open spaces, such as airports.

The agency plans to import and utilise the same type of tracking technology installed at airports in Dubai, US and Canada, to track drones that enter no-fly zones in Jamaica.

For civilian operators, the JCAA guidelines broadly prohibit drone flights over "private or public property or dwellings without prior permission".

Commercial operators - of which there are five main companies - are required to follow even more stringent guidelines.

Commercial operators are required to register with the JCAA, but not the individual drones that they operate, the aviation agency told the Financial Gleaner.

The flight safety notification indicates that breaches of JCAA regulations may lead to "penalties and fines against persons and organisations", but those fines are not specific to drone activity.

The JCAA says it plans to specifically incorporate drones in the regulations in 2018, which would require parliamentary approval.

"We actually have drafted civil aviation regulations that are going through the review process now, that will be promulgated in terms of the use of drones," said the JCAA head.

Hobbyists are expected to operate drones with a visual line of sight at or under 400 feet above sea level, clear of all visual obstructions, including clouds, buildings and hills; and at safe distances away from all obstacles.

Drones should not be operated within 500 feet of an open-air assembly, or within 165 feet of any person, except during take-off and landing for the operator of the aircraft. Additionally, the drone must operate outside of 16,500 feet or about 5 kilometres away from any aerodrome or helicopter landing zone.

Last year, the JCAA told The Gleaner that some 25 entities expressed interest in applying for drone certifications. The current statistics were not immediately available.

The JCAA has also seen interest from tourists who use drones recreationally.

The JCAA also said last year that professional drone operators are required to buy public liability insurance coverage of no less than US$100,000.