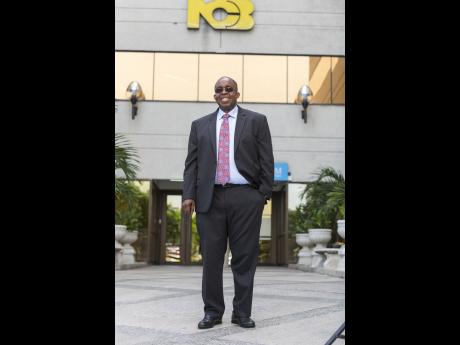 NCB Financial Group has been solidly ensconced at the top of Jamaica's commercial banking market for several years, but having just hit another profit milestone and with nearly $980 billion in assets, its managers believe they are well placed to dominate the region.

In fact, NCB already claims the title as the largest, most profitable group in the English-speaking Caribbean, having wrapped up another year of record profits, $28.6 billion after taxes, for the period ending September 2018.

"Today, in a real sense, we are there," declared NCB Financial President and CEO Patrick Hylton at the banking conglomerate's quarterly investors briefing at the NCB Wellness Centre in Kingston on Friday.

NCB grew its bottom line by 50 per cent for the year, up from $19.1 billion. Earnings equated to $11.39 per share versus $7.76 a year ago. Six of the group's seven operating segments grew in revenue and profitability, except the general insurance arm, which was hurt by reduced margins and competition.

"Our performance over nine months made us the most profitable financial institution in the English-speaking Caribbean," he said.

Two years ago, NCB aspired to rank within the top five in the region. In January of this year, the bank ranked itself at No. 4, based on its first-quarter pretax profit. Its pre-tax earnings reported after market close on Thursday was just shy of $34 billion for the full year.

"Ladies and gentlemen, it has been a remarkable journey from becoming the largest financial institution in Jamaica and from there to the position we now hold in the region," Hylton said.

NCB Financial made substantial progress on its build-out into a regional financial operation three years ago when it acquired a 29.99 per cent stake in Guardian Holding Limited of Trinidad & Tobago. It followed up that investment with a 50 per cent stake in Clarien Bank in Bermuda.

Guardian is one of the most profitable groups in the region, along with Sagicor Financial Corporation of Barbados, CIBC First Caribbean International Bank, and the Caribbean holdings of Scotiabank Canada.

Buttressed by its acquisitions, NCB Financial's asset topped $978 billion in September, up from $694 billion - putting another milestone of $1 trillion in assets within sight. Its equity base, or net worth, climbed 12 per cent to $130 billion.

The Jamaican bank still aims to acquire control of Guardian - it wants to increase its stake from 29.999 per cent to 62 per cent - but gave no additional information on progress made in the talks with the Trinidadian regulator and minority shareholders who have contested the takeover price.

Meanwhile, NCB Financial's Deputy CEO and chief financial officer, Dennis Cohen, says that the group expects its performance to continue improving in the year ahead.

"The growth came from core activity. I am very confident that this momentum will continue going forward," said Cohen.

He panned the idea of splitting the bank's stock, which traded above $132 on Friday, saying that while a split would create opportunities for short-term traders, it would have little effect on holders of the stock over time. He added that it would also impact the way the stock is perceived in its other trading jurisdiction, Trinidad & Tobago, where it closed trading on Friday at TT$6.50, the equivalent of $123 per share in Jamaican currency.