China, US agree to tariff truce, but movement on tech unclear 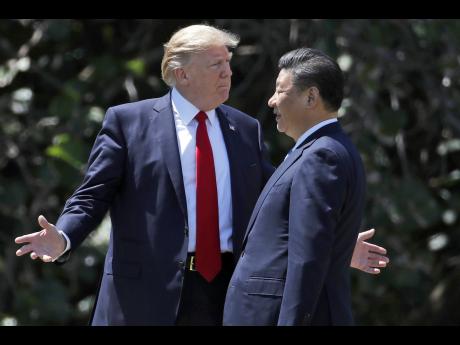 Buy more United States exports? Done. Tinker with technology tactics that irk Washington and other trading partners? Maybe. But scrap those plans, seen by Beijing as a path to prosperity and influence? Probably never.

The agreement by American President Donald Trump and his Chinese President Xi Jinping on a cease fire on tariffs postpones the threat of more disruption for China's exporters and their Asian suppliers. Some economists said Xi might be ready to negotiate in earnest.

Still, Beijing gave no sign of a changed stance on technology ambitions that Washington says violate Chinese market-opening obligations and might threaten US industrial leadership.

Trump's complaints strike at the heart of China’s state-led economic model and plans to restore China to its rightful place as a political and culture leader by creating global champions in robotics and other fields.

"It's impossible for China to cancel its industry policies or major industry and technology development plans," said economist Cui Fan of the University of International Business and Economics in Beijing.

At his weekend meeting with Xi in Argentina, Trump agreed to postpone planned US tariff hikes on Chinese imports by 90 days while the two sides negotiate. The 90-day clock starts January 1. Xi revived promises to narrow China's multibillion-dollar trade surplus with the United States by purchasing more American exports.

The outcome was "as good as we could have expected," the chairman of the American Chamber of Commerce in China, William Zarit, said in a statement.

Also late Sunday, Trump said on Twitter that Beijing agreed to cut import duties on US autos. There was no Chinese confirmation of the move, which would have little impact on trade because most American vehicles sold in China are made in China.

US Treasury Secretary Steven Mnuchin told reporters at the White House Monday that there was an "immediate focus on reducing auto tariffs," though he did not provide details or timing. Asked if there was a specific agreement to remove the tariffs, he said: "Yes, there was."

Yet Larry Kudlow, the top White House economic adviser, later Monday said that "We don't yet have a specific agreement on that," referring to the auto tariffs.

"But I will just tell you as an involved participant we expect those tariffs to go to zero," Kudlow added in a conference call with reporters.

Mnuchin stressed that the two leaders had detailed conversations on 142 items and said the goal now was to turn the talks into a “real agreement”. He said both leaders had extended invitations to visit their respective countries and said he expects them to meet in the “near future”.

Trump's promise gives Xi political room to negotiate after Beijing said earlier talks were impossible while Washington "holds a knife" of tariff threats to China's throat. But both leaders face a mix of economic nationalists, free trade advocates and other conflicting forces at home.

The outcome wasn't the result of a "significant change" by China, Louis Kuijs of Oxford Economics said in a report. Washington instead chose to see Beijing's argument that it already is making changes “in a more positive light”.

One sign of how far apart the two sides are: China's foreign minister announced in Buenos Aires that Trump agreed to stop raising tariffs, rather than that he promised a 90-day suspension. Wang Yi failed to mention industrial policy or Trump's demand that Beijing make progress toward changing it or face renewed increases.

Those omissions suggest Beijing doesn't recognise how important those demands are to Trump, said Nick Marro of the Economist Intelligence Unit.

"As a result we expect trade hostilities to resume in 2019," Marro said in a report.

China retaliated by raising its own charges on US imports.

The tariffs battle has overshadowed changes Xi's government has announced this year.

While Beijing retaliated for US tariff hikes by imposing penalty charges on American soybeans, autos and other goods, it cut duties on factory machinery and other imports from other countries.

The government also has promised to ease limits on foreign ownership of automakers, insurance ventures and other companies.

Business groups have welcomed those changes but say they don't address more important complaints about a thicket of rules limiting access to China's finance, logistics and other industries.

Companies want a genuine response with measurable goals, said Kenneth Jarrett, the president of the American Chamber of Commerce in Shanghai, in an email.

A measure of progress will be whether Beijing offers "meaningful concessions" on technology, said Hirson, Wright and Triolo of Eurasia Group.

Without that, hardliners in Washington "will urge Trump to resume escalation," they said.