David Jessop | At last, a time for action on the CSME 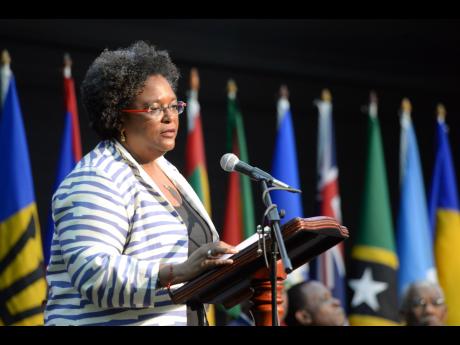 At the conclusion of the recent special summit in Trinidad, Caricom heads of government issued the 'St Ann's Declaration'.

It set out in the dusty language of officialese the measures being taken to breathe life into the stalled Caricom Single Market and Economy, the CSME.

However, far more interesting and accessible was a poorly reported but unusually detailed press conference held after the summit and available on YouTube. There, Barbados' Prime Minister, Mia Mottley, Jamaica's Prime Minister, Andrew Holness, Trinidad & Tobago's Prime Minister, Keith Rowley, and Caricom's Secretary General, Irwin LaRocque spelt out just how the heads intend resuscitating the CSME, by when, and what could happen should they fail.

In his remarks, Trinidad's prime minister made clear exactly what was at stake when he described the impact of the March 2017 Caricom Review Commission report produced by Jamaica's former prime minister, Bruce Golding.

It was the point at which Dr Rowley said that Trinidad recognised that if the CSME could not be made to work, Jamaica would reconsider in five years its status in Caricom, follow the Bahamian model, and exit the CSME.

Speaking about the importance of this in the context of the just-ended summit, he said: "If we had not been able to establish a pathway and get the CSME operational, Jamaica's exit in that way would have been disastrous for Trinidad and Tobago and the rest of the Caricom region".

He also indicated that at the meeting, Caricom leaders, before reaching a final position, had considered the possibility that if some countries had not been prepared to move forward to CSME integration "to take the plunge" as he put it they should be "allowed to go". In the end, he said, we got past that, and there was "a virtual consensus" on what was proposed.

The press conference also made clear how much energy and personal commitment Prime Minister Mottley is putting into the details of resuscitating the CSME.

In a long statement, she said that at the two-day meeting, a three-year work plan had been agreed which she as the prime minister responsible for CSME matters, would lead.

Work was under way to revise the Treaty of Chaguaramas to enable the private sector and labour representatives to sit at the table at Caricom meetings as associate members. There were to be detailed discussions on key sectors requiring action so that by July 2019, when Caricom heads meet, there will be an understanding of what needs to be done in relation to renewable energy, agriculture, and food security; inter-regional marine and air transport; and the region's ICT needs.

There would also be a review, Mottley said, of how well Caricom's 17 institutions were working. This would be an exercise that would "clean cupboards" so that "never again" would "lethargy and delay" be allowed to be the order of day.

The heads would also consider in 12 months' time a report from Caricom's secretary General on the action needed.

Mottley noted also that a review was under way on agricultural and phytosanitary measures, with the objective of removing constraints on inter-regional trade. There was, she said, a report-back date of February 2019.

She confirmed that work was proceeding on a Caricom financial services agreement, an investment policy and investment code, and the steps necessary to create an integrated capital market and model securities legislation, with the intention that all such work be completed by July 2019.

The Barbados prime minister went on to speak about other measures to be introduced to make the CSME a reality.

Why Caricom is not doing more to ensure that all of this is more widely understood is unclear.

This is particularly so at a time when convincing Caribbean people and the wider world that the region's leaders are at last serious about taking the long-overdue actions required.

In contrast to the dry and wordy declaration, the content of the little-viewed press conference contains some frank statements and indicates why Caricom needs a modern communications strategy providing the Caribbean people with access to such information in real time.

Quite rightly, the media continue to be cynical about politicians' promises and question Caricom's implementation deficit.

To obviate this, and to demonstrate seriousness of purpose about the CSME, all that is required is for heads to agree to establish online and on social media without delay a listing by heading of all that Prime Minister Mottley said is being done, the target date for achieving each initiative, and thereafter, a brief monthly update on the progress achieved in words and infographics.

In closing, Prime Minister Holness noted that the intention was to remove artificial barriers and the present unidimensional focus on goods and put in its place a multidimensional approach that involved goods, people, capital, and information, built on a solid base of security. Ms Mottley said that she hoped that Caricom heads had been able to give Caribbean citizens comfort that their leaders were taking the issue seriously.

What is apparent is that the three prime ministers genuinely believe that if action is not taken now and delivered within the agreed timetable, the CSME will break up and the region - and the woman and man in the street - will be significantly poorer for it.