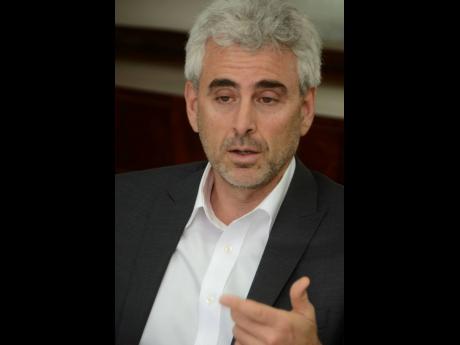 Construction company Tank-Weld Metals Limited is more than halfway through a large warehousing project at Ferry, on the Kingston-St Catherine border, that will deliver 320,000 square feet of storage space for lease to other companies.

The 10-acre spread is being developed in four phases at a cost of $4.5 billion, or US$35 million. The first and second phases spanning 160,000 square feet of warehousing space are already complete, and the third, comprising another 100,00 square feet on 2½ acres, is on track for delivery by August, says Tank-Weld CEO and Finance Manager Christopher Bicknell.

The space in the third phase is already fully committed to Jamaican companies, he said. The fourth and final phase will commence immediately after the third is wrapped up, and is scheduled to for delivery by early 2020.

“The location of Ferry is such that it is right at the entry to Kingston, the entry to the port, and also on the way to the west and the north via the highways. It is a great location for commercial activities. Logistically, it is ideal,” he added.

Other developments are on the cards, for which property has already been acquired, but the details of those projects will be revealed later, Bicknell said.

The Tank-Weld Group is a 45-year-old family operation engaged in the distribution of building materials, fabrication of steel structures, civil engineering and contracting, heavy-duty haulage and equipment rental. The company also owns and operates its own port at Rio Bueno in Trelawny, and engages its own vessel.

Tank-Weld owns and rents a warehouse, the old CMP building on Marcus Garvey Drive in Kingston, and has another two million square feet of warehouses from which it operates its own distribution business for steel and cement.

But warehouse construction for rental is a new line of business for the company, being done through subsidiary Tank-Weld Metals, Bicknell said.

“It’s our greenfield build-out of warehouses and the first investment in building for rental. It’s another division just started – a new venture for us,” he said. “The demand for warehousing is greater than I have seen it in 30 years. We are building and renting.”

Clients taking up space include rum maker J. Wray & Nephew, brewery Red Stripe Jamaica, beverage maker Wisynco Group, and a printery that produces labels for the local market and the Caribbean, says Bicknell, who adds that the buildings have been customised for clients’ logistical needs.

“What we chose to do is to have the floor of the warehouse four feet higher than the ground, so it is dock height. The container can reverse and goods can come straight off with a forklift and drive into the warehouse,” he said.

He noted that some occupants may choose to introduce cold storage, while others might customise the available space to manufacturing, or light manufacturing.

The buildings are 25-foot high and solid concrete all around. They feature ramps and roller shutters, and skylights in the roof that reduces the need for lighting for most hours of the day, he said.

The financing for the Ferry project has come from internal resources. The land was acquired back in 2006 and held by the company for a decade until the demand for warehousing triggered the current investment in its development, said Bicknell.

The returns from the warehousing construction project that began in 2017 is already delivering 10 per cent per annum, he said.