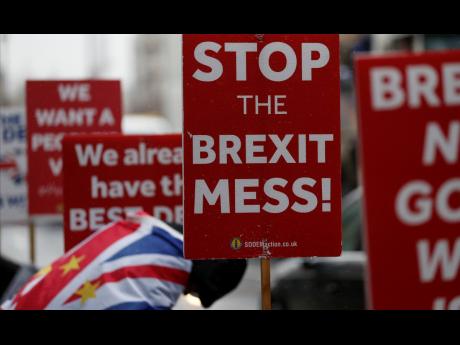 AP
Anti-Brexit protesters with placards stand in the rain during demonstrations outside the Houses of Parliament in London on Tuesday, April 2.

Britain’s huge services sector contracted in March for the first time since the immediate aftermath of the vote in June 2016 to leave the European Union, EU, as firms put off new investments until the fog of Brexit has been lifted, a survey found Wednesday.

Financial information company IHS Markit said the downturn in the sector, which accounts for around four-fifths of the British economy, reflected a lack of new work to replace completed projects, with many executives wanting Brexit clarity before making commitments. It said Brexit concerns and worries about the economy also appeared to hold back household spending.

The firm’s main services sector purchasing managers index – a gauge of economic activity – fell to 48.9 points in March from 51.3 the previous month. Readings below 50 indicate a contraction in activity, and it’s the first time the index has fallen below that level since July 2016, when firms were dealing with the shock of the referendum result.

“Service sector order books have contracted at the steepest rate since the height of the global financial crisis in 2009 so far this year, with companies reporting that Brexit uncertainty has dampened demand and led to cancelled or deferred spending, exacerbating a headwind from slower global economic growth,” said the firm’s chief business economist, Chris Williamson.

According to the firm, the services sector joins construction in being in decline, with the wider economy held up only by the fact that manufacturing is booming, because many firms have started stockpiling materials and other goods due to Brexit uncertainty. Overall, IHS Markit said, the British economy flatlined in the first quarter of the year and the protracted Brexit uncertainty risks weakening it further.

“A stalling of the economy in the first quarter will therefore likely turn into a downturn in the second quarter unless demand revives suddenly which, given the recent escalation of Brexit uncertainty, seems highly improbable,” said Williamson.

The UK was set to leave the EU on March 29, but Parliament’s rejection of Prime Minister Theresa May’s withdrawal agreement with the bloc meant that deadline was missed and a new one was set for April 12. May said Tuesday she would seek another Brexit delay and hold talks with the opposition to seek a compromise, but it’s unclear whether that will lift the uncertainty for businesses.

Following May’s latest move, there’s a growing expectation that the UK will be granted a long extension to its departure date and that any final Brexit outcome will end up involving closer economic ties with the EU. Though business associations have widely called for such a scenario, the uncertainty is likely to persist for a while yet and that could keep a lid on investments.

“While this would give firms a temporary reprieve from the ‘no-deal’ risk, we suspect companies will continue to make preparations for this scenario,” said James Smith, an economist at ING. “All of this is costly, and we think under the scenario of a long extension, growth would continue to suffer.”