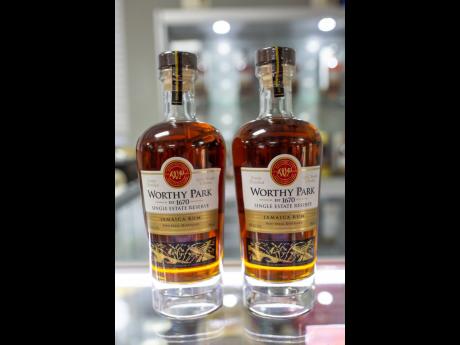 W orthy Park Estates is looking to rum for more revenue, saying its reputation as Jamaica’s most efficient estate is not enough to overcome changes in the sugar market that are driven by external events.

In a continued tweak of its more than 300-year-old business model, the estate has introduced the Worthy Park Single Estate Reserve, a premium rum that adds a new layer to the company’s spirits portfolio.

Co-Managing Director Gordon Clarke says despite the fact that Worthy Park has cane yield, cane quality and factory efficiency that are the gold standard for Jamaica’s sugar industry, the company has to diversify its income streams to counter the sugar industry’s decline.

“The industry is being right-sized, traditional markets are being replaced, value adding is being done, and this is all happening when we are also changing our business model from a bulk commodity manufacturer to a manufacturer of quality-branded products,” Clarke said at a weekend event.

Worthy Park has been diversifying since 2004 when it re-established rum production. Clarke says the first bottles of Rum-Bar rum hit the market in 2010 and quickly garnered so-called ‘share of throat’, or market share, from Wray & Nephew White Ovenproof Rum.

Marketing Manager Tamika West says the sizable market share did not go unnoticed by the competition, but volume sales have fallen since.

“During our highest point, since our launch, we were up to 100,000 standard cases of white overproof rum. The full market, we know, is around 500,000 cases, so that gave us about one-fifth of the market,” said West.

West says the move to go with a reserve blend of rums is meant to claw back market share, while also going upmarket.

“It gives us an opportunity to operate in the premium rums segment, because the current portfolio that we have is what we consider standard rums,” West said, referring to the two white rums, Worthy Park Gold and Rum Cream.

“Our estimate is that the premium rum segment is operating at around 45,000 cases. We are at the introductory stage and it’s been so far so good, as far as public acceptance goes,” West said.

Worthy Park uses copper pot stills manufactured in Scotland to do its rum production. This more expensive method means that the estate is the only rum distiller worldwide who has persisted with this process rather than adding column stills made of stainless steel, according to Clarke.

Over the past decade, or more, the company has poured around US$20 million into the rum operation.

“The aged rum is worth over US$10 million and we spend just under that for this set-up. In the last 14 years, we’re talking more than US$20 million,” he said.

Worthy Park Single Estate Reserve is a blend of six- to 10-year-old rums aged at the estate in St Catherine.

The company has rums ageing up to 14 years, come July. A 12-year-old rum is already bottled, but is being exported, and won’t be released in Jamaica until 2020. Worthy Park also sells specialty rums aged in port and sherry casks, which give a different flavour from the white oak casks that are more generally used for ageing.

Distribution of the company’s rums is now handled by new business partner Wisynco, but marketing of the brand is done in-house. Worthy Park brought Alexander Kong over three years ago to build out the export portfolio one market or rum festival at a time.

Kong says overseas markets account for 15 per cent of Worthy Park’s total rum sales, and that the product is sold in 24 countries spread across all five continents, including the United States, United Kingdom, Germany Italy, Poland, Spain, China, and Thailand, as well as a small foothold in South Africa.

Worthy Park Estates was established in 1670 when it was gifted to Lt Francis Price for his services to Cromwell during the English capture of Jamaica from the Spanish in 1655. The estate grew from just under 400 acres to over 10,000 acres when it was purchased by Frederick Clarke in 1918.

Last year, Wisynco acquired a stake in the company and became its distributor, expanding the ownership base.

“Times have changed and while some of us have expanded our ownership, we have also recently welcomed two non-family managers and Wisynco as shareholders, all of whom will strengthen the company,” Clarke said.