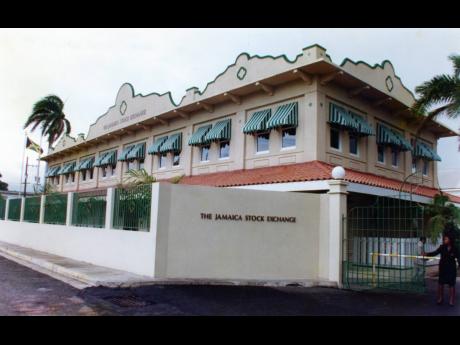 Gleaner Photo
The headquarters of the Jamaica Stock Exchange on Harbour Street, Kingston.

Performance in equities was muted because of low earning reports among listed companies but the asset class retains its starring role among investors, according to the central bank’s latest ­monetary report for the quarter ending March.

Stock market wealth traded through the exchange is valued at around $1.6 trillion.

The Bank of Jamaica, BOJ, said equities yielded a quarterly return of 2.7 per cent in the March quarter; foreign-currency investments recorded a negative quarterly average return of 0.5 per cent; and the 30-day private money market repo was up by 0.6 per cent, relative to 0.5 per cent for the December 2018 quarter.

For the March quarter under review, all but one of the major Jamaica Stock Exchange, JSE, indices recorded growth – the exception being the Junior Market Index – although at lower levels relative to the previous quarter.

The JSE Main Index increased by 2.2 per cent compared to the 6.0 per cent growth reported in December period. The Junior Market Index declined in both periods.

In the BOJ Quarterly Monetary Policy Report, the QMPR, the ­central bank indicated that the outturn of the equities market was partly influenced by the ­“lacklustre earnings of several companies listed on the Main Exchange and the Junior Market” and that the phenomenon “largely reflected stock price normalisation”, given the sharp increases experienced over the past two years.

The BOJ said that while the ­mining, construction, agriculture and ­tourism sectors were the main drivers of Gross Domestic Product growth in the ­economy during the December 2018 quarter, many companies within this sector were not listed on the exchange.

Year over year, all five JSE indices showed continued growth, with the JSE Main Market and Junior Market indices up 31.8 per cent and 4.5 per cent, respectively. There were two initial public offerings in the quarter, whose oversubscription was reflective of investors’ preference for equities, given the reduced presence of the Government of Jamaica in the domestic bond ­market, the report theorised.

The value and volume of ­transactions on the market declined by 31.3 per cent and 40.8 per cent, respectively, while the growth in the number of transactions ­decelerated sharply to 2.4 per cent.

The financial and manufacturing categories dominated the list of top ten advancing stocks, ­accounting for average price appreciation of 12.6 per cent and 9.8 per cent, respectively, for the review quarter.