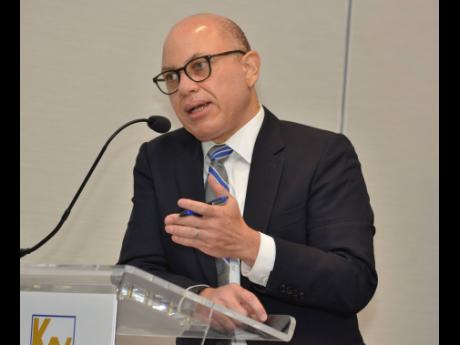 Food and logistics conglomerate Jamaica Producers Group is expanding its shipping business in the United Kingdom with new warehousing space to enable freight consolidation to the Caribbean.

The expansion would increase warehousing capacity by 20,000 square feet, or 40 per cent, and allow for the shipment of orders to the Caribbean that are smaller than a regular container load.

“We are in the process of identifying a suitable location for a Caribbean logistics centre where less than a container of cargo can be received in London and shipped to all the countries across the Caribbean,” JP Managing Director Jeffrey Hall said at the company’s annual general meeting in Kingston on Friday.

Hall did not disclose the size of the investment.

The warehouse project will expand a long-standing business segment operated by JP in the UK market.

JP’s new initiative aims to satisfy demand from small and medium-sized traders in the region seeking to import goods into the Caribbean. Hall explained that ­customers can originate orders anywhere in the world that are shipped to JP’s operations in the UK and delivered from there to anywhere in the Caribbean.

The company currently earns freight revenue of about $1 billion from its shipping service.

“We are currently looking at a facility the size of 20,000 square feet,” Hall told the Financial Gleaner, adding that the location would be close to London.

“We will increase the warehouse space by 40 per cent, but, hopefully, the growth in business will be more than that,” he said.

Hall expects to complete the Caribbean logistics centre by or before the first quarter of 2020.

The Kingston-based JP Group holds $12.1 billion in shareholder equity, with $35 billion in total assets spread across the globe. Its main segment investments are in snacks in the Caribbean, juices in The Netherlands, shipping in the UK, and logistics in Jamaica.

Hall said at the AGM that the deal would be accretive to JP over the next “one to three years”, that is, it is expected to grow the ­company’s earnings. He added that the $720 million would be utilised for investment purposes but did not disclose specific projects. Hall says Wisynco will assume the local distribution of JP Snacks while JP will focus on international distribution.

JP Snacks operates out of a distribution centre in Kingston, with snack factories both in Jamaica and the Dominican Republic. It distributes under the St Mary’s and Monte Cristi brands to markets in Jamaica and the Caribbean, the United States, Canada, the United Kingdom and Central America but also packages tropical snacks for third-party brands in English- and Spanish-language markets across the region.

JP plans to launch new rum cake products in Mexico and the wider Caribbean that focus on locally known spices. These include specialty vanilla rum cakes for Mexico and rum cakes utilising specialty rum from the Dominican Republic for that market. It will allow JP to market its products to over 40 million additional tourists, said Hall.

The company is also considering a citrus rum cake utilising Florida oranges for the Miami market.