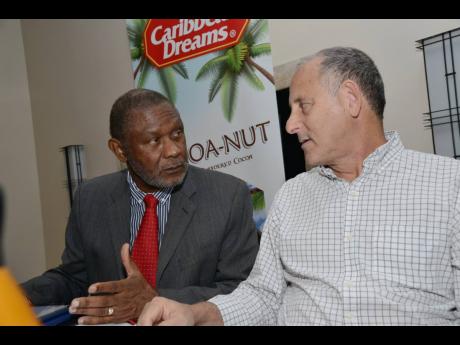 A new investment company that will trade in listed securities for its own gain is shelling out up to $5 million on a media campaign to distinguish itself from the pack when it approaches the junior stock market this summer in search of equity capital.

The unknown QWI Limited, a three-month-old company, will be competing with known fincos – Eppley and Sagicor Investments – which are coming to market with multibillion offers; as well as other junior market initial public offerings, or IPOs, from small operators such as The LAB.

QWI was formed in March from the combination of the investment portfolios of connected companies KIW International Limited and Jamaican Teas Limited. Its holdings have grown to $500 million since the spin-off, says Managing Director John Mahfood, up from the initial contribution of $450 million from the two partners – $250 million from KIW; and $200 million from Jamaican Teas.

Mahfood says the companies have equal ownership in QWI. Asked about the name chosen for the operation, he said ‘KIW Investments’ and other variations of the name were already taken, and so “QWI was the next best thing”.

“A good way to look at it is that QWI represents ‘quality wealth investments’,” he said.

QWI will trade as an investment company, but is not a registered securities dealer. Mahfood says they have not approached the Financial Services Commission, FSC, for a dealer’s licence, and doesn’t believe QWI needs one as the company will be trading solely for its own benefit, and not on behalf of other investors.

Chairman John Jackson affirmed that position, but he also told the Financial Gleaner that the FSC has recently made a new stipulation that QWI engage a third party to manage the investment portfolio.

QWI, however, is questioning the need for such a move and has asked its lawyers for guidance.

“The lawyers are having discussions and we will see, but I won’t be asking our board to go to the market while engaging any third party. It doesn’t make any sense,” Jackson said.

The QWI advertising campaign, which Mahfood said is costing $4 million to $5 million, centres on the people who will manage and govern the company as well as the history of the two shareholder companies.

Details of the share offering were sparse, as the company is still awaiting sign-off on the prospectus by the FSC. However, junior market fundraisings are confined within a band of $50 million to $500 million of equity capital.

QWI expects to invite subscription to the IPO by September, Mahfood said, but is hoping to get to market before that date.

“We want to do it as soon as we can, and not wait until the end of summer,” said Mahfood, who is also the CEO for Jamaican Teas.

The company hopes to attract a broad base of investors, rather than mostly institutional investors, hence the push to gain name recognition and introduce itself to the public via the ad campaign.

“Pension funds and so on may already be fully invested in the market, but we believe that the general investor will find this attractive because what we will have, pending approvals, is a group of knowledgeable persons who are investing in a broad cross section of the stock market. By investing in us, the public can get that benefit,” he said.

Once QWI gets the go-ahead from FSC on its prospectus, the ad campaign will be followed up with road shows and direct presentations.

“There is a lot of activity on the market right now by way of stock market investment opportunities. We see Eppley and Sagicor already out there, and probably more to come,” said Mahfood.

“It is going to be a busy summer, so we want people to be aware that there is this investment coming, too,” he said.

QWI is classified as a subsidiary of Jamaican Teas, which owns just under 50 per cent of the investment company directly and around another 25 per cent indirectly through its 50 per cent holdings in KIW International.

For the time being, QWI will be steered by its board of directors and will share the services of its parent company, in exchange for a fee.

“Jamaican Teas already has a finance department and individuals and systems. We will use that excess capacity to provide those services for a small fee. Instead of starting out with staff and so on, we will have shared services,” Mahfood said.

He adds that the structure of the operation would ensure there would be no intermingling of funds.

“Those will be all owned and maintained in the books of the subsidiary. There are no common bank accounts,” Mahfood said.

The company plans to invest in equities that are listed on either the Jamaica or Trinidad stock market.