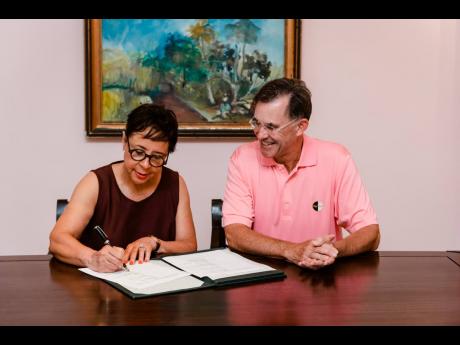 Founder and CEO of Salamander Hotels and Resorts Sheila Johnson and Chairman of Half Moon Guy Steuart III sign the agreement for Salamander to manage the luxury resort in Montego Bay.

Luxury resort Half Moon has inked a deal with Salamander Hotels and Resorts to manage its 400-acre beachfront resort in Montego Bay.

Half Moon’s decision to partner with Salamander Hotels on the management of its property comes months after Half Moon’s announcement to add 57 guest rooms and suites and new restaurants this year in celebration of its 65th anniversary.

Specialising in independent luxury, Salamander’s business model is similar to that of Half Moon, which currently offers guests a wide variety of amenities and activities, including a wellness spa, an 18-hole championship golf course with a golf academy, an equestrian centre, water sports, restaurants, shops, and other amenities.

“With successes in operating luxury, golf, and beach properties, Salamander is our chosen hospitality partner for Half Moon,” chairman of Half Moon, Guy Steuart III, said in a press statement announcing the partnership.

“Since the inception of Half Moon, our team members have injected their hearts and souls into what has become a globally recognised brand and symbol for gracious Jamaican hospitality, one of the finest experiences in the Caribbean. As we commemorate our 65th anniversary, Half Moon intends to build on its reputation of providing transformative experiences for generations of discerning travellers,” he said.

In 2016, Half Moon parted ways with RockResorts, a subsidiary of Vail Resorts Inc that managed the resort. At the time, Half Moon noted that the change in management followed a “mutual decision” to terminate the contract after RockResorts’ decided to shift focus to its mountain lodge properties.

Since then, Half Moon has made public its partnership with revenue strategy company Duetto on its flagship application, GameChanger, for room pricing and digital distribution. With the application, Half Moon was able to yield rates more rapidly and with greater flexibility, drawing on web shopping ‘regrets and denials’ data to better measure price sensitivity.

“This is a wonderful addition to our Salamander portfolio. Salamander has one million enthusiasts, and in the next 48 hours, they are going to be hearing about Half Moon, many of them for the first time,” president of Salamander Hospitality, Prem Devadas, told the Financial Gleaner.

Devadas said the partnership is expected to result in an additional one million guests travelling to Jamaica for leisure or corporate stay at Half Moon, with the assistance of Salamander’s founder and CEO, Sheila Johnson.

“For years, we have had an interest in operating in Jamaica. We made several efforts, but the right property never came until now, and we look forward to working with 800 employees of Half Moon into making this the best resort in the world,” Devadas said.

He added that Half Moon’s iconic image as an independent luxury resort and Salamander Hotels’ speciality in dealing amenities such as spa and golf made the resort “a right fit” for the management company.