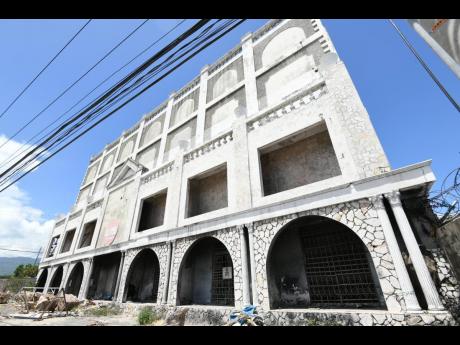 The building that once housed Globe Fine Furniture, formerly known as one of the largest assemblage of fine hand-crafted furniture in the Caribbean, has been placed on the market after sitting idly for several years.

The property at 46 Constant Spring Road in Kingston, which covers 10,934 square feet or approximately a quarter of an acre, was put up for sale over a month ago by owner Vaughn Bignall, an attorney at law.

Based on the property title, Bignall acquired the asset under power of sale of the mortgagee for $48 million in 2017– which is half the current asking price.

Garfield White, the contact person listed for the property, told the Financial Gleaner that the asking price was calculated based on a valuation conducted in 2017, plus a mark-up, and was also based on estimation that land space was limited and in demand along Constant Spring Road. Offers have been coming in, he said, but they are well below the listing price.

“It’s negotiable,” White said of the sale price. “The offers on the property range between $40 million and $45 million, but we tell them no,” he said.

Companies Office of Jamaica and Titles records also revealed that Boothe and his partners in a company called Island Traders Limited gained ownership of the Constant Spring Road property in May 1995 through a mortgage with the Mutual Security Bank Limited at 18 Trafalgar Road, prior to its merger with National Commercial Bank.

As business heated up, Island Traders secured another loan from the Mutual Security Bank, but by June 2002, the debt was transferred to the National Commercial Bank for a consideration of $1.93 billion. Island Traders’ debt was acquired a year later by Jamaica Redevelopment Foundation Inc, an American firm that eventually took over the Finsac debt, which had been bundled and sold by the Jamaican Government in the wake of the financial sector rescue programme mounted in the 1990s. In April 2017, Jamaica Redevelopment Foundation sold its interests in Island Traders to Bignall.

Aside from Globe Furniture’s indebtedness during its operation, Globe Furniture’s closure also resulted in the building being referred to as an “eyesore” from its use as a shelter for the homeless, which caused mounts of garbage on the property.