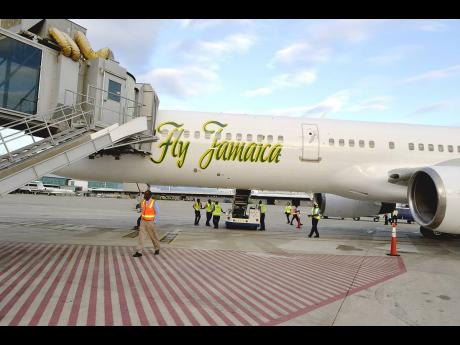 File
A Fly Jamaica aircraft is seen being prepared for flight in this 2013 file photo.

The new owners of Fly Jamaica plan to return the airline to the sky in early September, supported by an expanded fleet of planes that are due for delivery between October and November 2019.

Majority owner and CEO Glenn Logan says he and his partners want to get the airline operational again in the shortest time possible, which they project will require spending of US$10 million to US$15 million.

Those investors include a French acquisition and diversified financial outfit called W&L SAS, which is headed by IT and management expert Yann LeProvost. The Frenchman has a record of involvement in capital investment in hotels, agriculture and mining.

Logan also has backing from another source that does not wish to be named.

“I can’t call any names, but there is also a Greek component and they are in tourism through some tour companies and some airlines and they are also into banking,” he told the Financial Gleaner.

He did not disclose the cost of acquiring the company founded by Ronald Paul Reece. The capital earmarked for spending includes the new planes that are to be acquired on a lease-to-purchase basis.

Logan, 59, is a Jamaican who migrated at age 14 and has worked with a number of aviation businesses over the years, including Canada 3000, British Airways and Sun Wing Airlines.

His connection to Fly Jamaica began in 2015 when he was hired as a consultant by Reece.

“I came on as a consultant to Mr Reece in the area of marketing, and when I was giving him certain advice, he looked at me and said ‘Why don’t you buy the airline?’ Logan said.

He adds that a deal has been in the making since 2016.

“We’ve been talking to Yann’s team for about three years and they have been trying to help us get the necessary financing.”

Prior to its acquisition, Fly Jamaica had two aircraft: the Boeing 757 that skidded off the runway in Guyana; and a Boeing 767-300ER, which was undergoing a certification check in Mexico. The airline was unable to transport or refund passengers, or meet other financial obligations.

Logan says job one is holding discussions with the Jamaica Civil Aviation Authority about Fly Jamaica’s airline operating certificate, which was suspended in March, but the new owners will also be dealing simultaneously with redundancy payments, passenger refunds, and a rebranding campaign.

“We’re bringing in fresh capital to pay off all the debts, reimburse the passengers, and we will pay off the redundancy to all employees – and that will happen within the next two weeks,” Logan said.

The airline will maintain its current identity to achieve recertification in the shortest possible time, and will be looking to renegotiate fuel contracts as well as airport charges, whether in Jamaica, New York or Toronto.

“You can’t change an airline just like that. We will still have to use Fly Jamaica. That said it will call for a fresh approach with a new appeal to the public that we serve,” Logan said of the rebranding and adjustment to the business model.

The fleet will be expanded immediately to at least five aircraft: Two 767s for long haul flights, two 737 for short-to-medium haul along, with the long-haul 767-300ER that is presently undergoing certification checks in Mexico.

In addition to the two routes formerly plied by Fly Jamaica – New York and Toronto – the carrier plans to add gateways in in Fort Lauderdale and Atlanta. These routes will take care of travellers in the ethnic market.

Scheduled flights are expected to account for less than half of Fly Jamaica’s business. The bigger portion will come from the packaged tours market through charters – to be done through a subsidiary operation called Fly Jamaica Vacations. France, Germany and Belgium are targets for charters.

“We’re going to put together Fly Jamaica Vacations,” said Logan. “We’ll partner with a hotel. The seats that we don’t fill with charters then, those will be sold into the ethnic market at competitive rates,” he added.