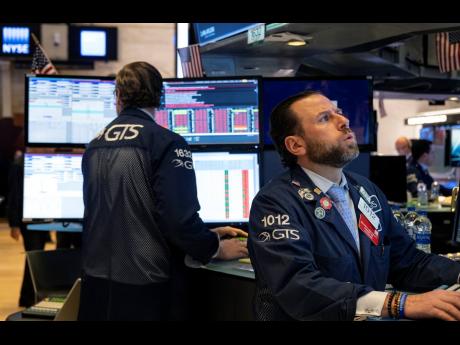 Stocks fell sharply around the world Monday as the coronavirus forced huge swathes of the economy to the edge of a standstill, from parked airplanes to the nearly empty restaurant around the corner.

The losses accelerated on Wall Street in the afternoon, and the S&P 500 was on track for a nine per cent loss.

The US Federal Reserve announced a new round of emergency actions on Sunday to prop up the economy and get financial markets running smoothly again, but the moves may have raised fears even further. Investors are also waiting for the White House and Congress to offer more aid to an economy that’s increasingly shutting down by the hour.

The selling began immediately on Wall Street, sharp enough to trigger a temporary trading halt for the third time in the last two weeks. Losses were even sharper in Europe before paring, and major indexes there fell between four per cent and six per cent. Oil lost 9.5 per cent and has more than halved this year. The world’s brightest spot may have been Japan, where the central bank announced more stimulus for the economy, and stocks still lost 2.5 per cent.

The spreading coronavirus is causing businesses around the world to shut their doors. That has economists slashing their expectations for upcoming months, and Wells Fargo Securities said Monday it now projects the United States economy will fall into a recession in the April-through-June quarter. Joel Prakken, chief US economist at IHS Markit, projects the economy will shrink at a 5.4 per cent annualised rate during the quarter, which would be its worst performance since the depths of the Great Recession.

Strategists at Goldman Sachs say the S&P 500 could drop as low as 2,000 in the middle of the year, which would be a 41 per cent drop from its record set just a month ago. Goldman expects the index to rally back to 3,200 at year end.

American Airlines and United Airlines both announced steep cutbacks to flights over the weekend as customers cancel trips and the US government restricts travel.

The Fed has been trying to do what it can to help the economy, and over the weekend it slashed short-term interest rates back to their record low of nearly zero.

It also said it will buy at least US$500 billion of US Treasury securities and US$200 billion of mortgage-backed securities to help calm the Treasury market, which is a bedrock for the world’s financial system and influences stock and bond prices around the world.

“Despite whipping out the big guns,” the Fed’s action is “falling short of being the decisive backstop for markets,” said Vishnu Varathan of Mizuho Bank in a report. “Markets might have perceived the Fed’s response as panic, feeding into its own fears.”

The yield on the 10-year Treasury slid to 0.72 per cent from 0.95 per cent late Friday, a sign that investors are flocking into investments seen as safe.