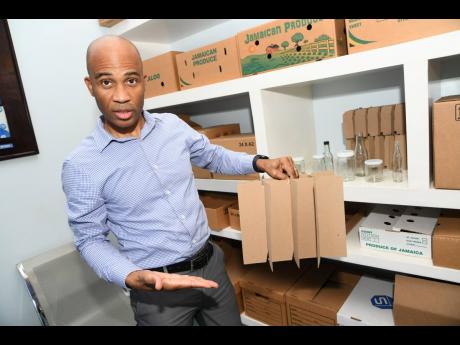 Rudolph Brown
Sterling Packaging Limited CEO Edgar Booby Stone shows off partitions made by his company, a product he credits with setting Sterling apart from the competition, on February 8, 2021. 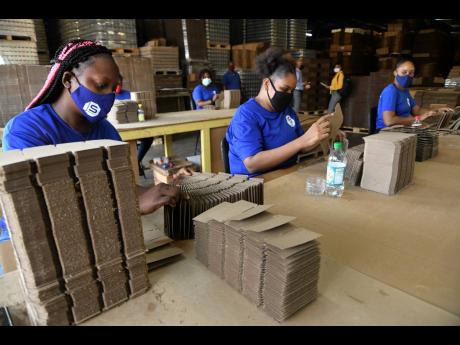 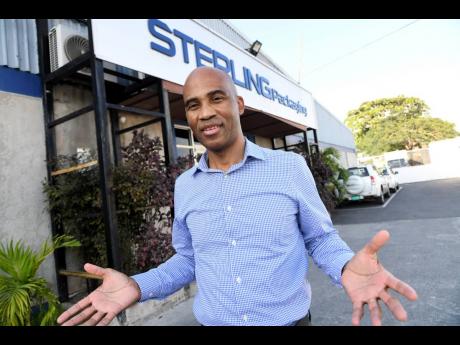 Edgar Bobby Stone hung up his hat as a procurement manager at the GraceKennedy food and financial services group in 2014 to become his own boss as the owner of Jamaica’s fourth corrugated box making company. Venturing into business is risky, so...

Edgar Bobby Stone hung up his hat as a procurement manager at the GraceKennedy food and financial services group in 2014 to become his own boss as the owner of Jamaica’s fourth corrugated box making company.

Venturing into business is risky, so Stone did all the research needed to ensure that his company, Sterling Packaging, would take off before handing over his resignation letter. And mentally, he was prepared to use the pension savings that he had accumulated during his time at GraceKennedy, along with the money from the sale of an apartment owned by him and his wife, to get the business off the ground.

Not once did the thought of losing everything to a fire occur to the couple.

“We started out in a rented space on Ashenheim Road and not too long after we started, we had a fire. That was devastating for me because I was outsourcing my risk, and I discovered that the inventory held in the facility was not insured,” said Stone. “And so after a year, I started again from zero,” he told the Financial Gleaner during an interview at the company’s new office on Bell Road in Kingston.

The company eventually got back on its feet, and today is contemplating entering a new business segment – paper products – a US$100-million bet on which a final determination is to be made in less than two years, but a test run for which is likely this year.

Stone, who has three sons ranging from age six to 17, visualises his children someday leading the business that, he says, now has sufficient insurance for building and content, a fire-safety system in place at its new location, and undergoes annual inspections by the fire department.

Sterling Packaging first entered the market through the sale of glass bottles, with sauce maker Ashman Foods Limited as its first client, before moving into the importation of corrugated boxes. It still imports glass bottles out of Central America for resale.

Months after acquiring new space at 19 Bell Road in 2016, Sterling Packaging began purchasing equipment for the manufacturing of corrugated boxes and partitions, or dividers, for boxes – the latter product being, Stone says, what continues to separate his company from competitors AMG Packaging, Jamaica Packaging Industries and Red River Limited.

With the exception of AMG Packaging & Paper, which is listed, the companies in the packaging sector are privately held. Stone estimates that he controls 18 per cent of the corrugated box market and 70 per cent of the supply of partitions. He noted that Sterling was able to grab new business during the pandemic, saying more entrepreneurs in need of boxes and bottles turned to his company for supplies – which had substantial inventory on hand – when his competitors were undergoing supply chain disruptions as the disease spread.

From a single sauce maker client, Sterling Packaging now supplies some 180 businesses with glass bottles, corrugated boxes and partitions across the manufacturing, food and beverage, fresh produce and stationery sectors. The highest production volumes come from its box line of 30 stock-keeping units, or SKUs. A SKU is an inventory tracking code assigned to a product category by a company.

The business has grown from six hires back in 2018 to 35 workers, who mainly reside within the environs of Kingston’s industrial belt.

“I worked at GraceKennedy for 17 years in the food division, and quite often I would get excuses from my suppliers that they could not supply us because they didn’t have certain packaging inputs. Partitions were just one of those things that were quite difficult to get. I saw the opportunity …,” Stone said.

Sterling Packaging’s new home is a 28,000-square-foot complex, 3,000 square feet of which is assigned to office space and the rest to manufacturing and warehousing.

The box-making company currently runs one shift on its partition manufacturing line, which leaves it with roughly 40 per cent of unused capacity. Sterling is looking to grow exports, and beef up production volumes to serve new markets inside Caricom.

The five-year-old company has already started exporting its box partitions into Trinidad & Tobago and Belize, and has eyes on Guyana and Barbados where talks are ongoing with manufacturing companies to secure supply contracts for its box partitions.

“Partitions are not things people think about every day, but in order for bottled items to be shipped, [the box] must have a partition. That presents a really good opportunity for us to grow. We supply many local companies with partitions, and as it relates to exports, we have the technology and we are a part of Caricom,” said Stone.

“The countries that we are targeting don’t have the technology, but they are part of Caricom, so it’s an easy entry to the market,” he added, referencing their lack of partition-manufacturing capability.

But he doesn’t see the same opportunities for boxes and bottles immediately, saying regional markets are “fairly well supplied” with those products right now.

Sterling Packaging’s exported products account for 15 per cent of company revenue. Stone wants to double that to 30 per cent by 2023. While Stone is advancing talks with potential buyers in Guyana and Barbados, and advancing the company’s geographic market diversification, he is equally focused on a different type of expansion at home that would add a new revenue stream. But is doing so cautiously.

Sterling Packaging is laying the groundwork to start supplying the local market with patty bags later this year.

The company wants to produce and supply the bags eventually, which would require an investment of US$100 million, or around $14 billion to $15 billion in local currency, to install what Stone calls a ‘flexible’ product category. But before committing the funds, the company first plans to import both patty bags and paper shopping bags with handles for distribution, to test the market’s response.

“The flexible category is something that was conceptualised in 2014 when the business started. However, at that time we had to prioritise boxes, given the demand. But based on recent developments in the regulations [regarding the discontinued distribution of small plastic bags], that is now our new focus, and we are having discussions with our suppliers,” Stone said.

Stone did not disclose the projected earnings expected from the added flexible line or export push.

If Sterling Packaging moves ahead with the flexible line, it will offer the products to its existing client base first, before looking for new buyers across Jamaica.

“I think within 18 months we will know for sure if this is something worth investing in,” Stone said.