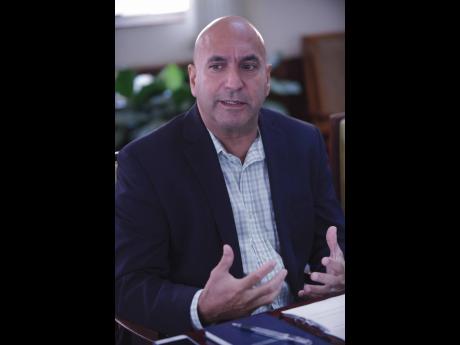 It’s been a decade since the Jamaica operation for Sagicor last saw net earnings this low, within the $4-billion range, but the rout is unlikely to be repeated this year; the group having already stripped itself of the hotel holdings that have been...

It’s been a decade since the Jamaica operation for Sagicor last saw net earnings this low, within the $4-billion range, but the rout is unlikely to be repeated this year; the group having already stripped itself of the hotel holdings that have been a drag on its performance.

The numbers confirm what the management at insurance conglomerate Sagicor Group Jamaica Limited and financial analysts had seen looming on the horizon – the group’s 20-year profit growth run had been upended by the once-in-a-century global health crisis.

Still, its bottom line was fairly resilient after discounting for the portion of earnings that Sagicor does not control.

Profit attributable to owners of the Jamaican insurance conglomerate closed the 2020 financial year at $13.79 billion, nearly $2 billion down from $15.65 billion of earnings in 2019, but equal to the earnings of $13.8 billion in 2018. The $9.3 billion of losses contributed by non-controlling interests at year ending December 2020 eroded net profit to $4.48 billion, a near fourfold decline from $15.46 billion in 2019.

Group President and CEO Christopher Zacca, now entering his fourth year at the helm of the insurance behemoth, is taking the 2020 full-year results in stride, highlighting what he sees as the silver lining.

“The out-turn was an amazing performance by the best team in financial services, given what we faced. If you normalised the profit out-turn (to strip out) impairments for tourism, etc, it would have given us a great record year, despite the pandemic,” Zacca told the Financial Gleaner in an interview.

Sagicor’s bottom line was negatively affected by a $4.5-billion impairment on the group’s hotel assets – in particular the shares it held at the time in international hotel chain Playa Hotels and Resorts, which operates resort properties in Jamaica, Mexico and the Dominican Republic – $2.7 billion of which was booked in the fourth quarter. Total losses on the hotel portfolio amounted to some $5.4 billion.

The insurance conglomerate shed the loss-making investment in January when it sold its 20 million Playa shares, raking in cash of US$96 million, or about $14 billion, from the disposal. Sagicor Group said the cash is already earning interest and is at the ready for redeployment into commercial and residential real estate projects or deals.

Over the year, Sagicor Group grew its cash holdings by $20 billion to $37 billion.

Total revenues fell nine per cent to $84.57 billion from $92.6 billion, the partial result of what was said to be a huge reduction in fees as corporate financial deals all but dried up.

But, as the Sagicor Group management was quick to point out, the fundamentals held firm despite the challenges. The business posted another year of asset growth to $490.7 billion, up seven per cent from $460 billion. The conglomerate’s capital base grew 17 per cent, pushing its net worth to $106.4 billion; although owners’ return on equity went south, having fallen from 19 per cent to 14 per cent.

Total assets under management remained relatively flat at $905 billion, a narrow two per cent decline from $928 billion. Sagicor’s insurance subsidiary is the largest manager of private pension funds in Jamaica.

The group’s results were dragged, too, by $1.7 billion in credit losses on loans at its commercial banking arm, Sagicor Bank Jamaica, as well as on its investment business, Sagicor Investments Jamaica. There were large unrealised capital losses related to the group’s segregated funds, and an increase of $2.28 billion in payout to policyholders who moved to withdraw cash from the funds during the year.

The core insurance business probably emerged the ultimate hero of the Sagicor Group story of 2020. Net premium income of $50.4 billion grew eight per cent in a significantly slowed economy, registering growth in both individual life and group life insurance. The individual life segment posted improved profits of $7.95 billion, compared to $5.37 billion in 2019.

The Sagicor management said this was driven by new policy sales in Jamaica and Cayman, which was up by about three per cent over the year, resulting in a six per cent growth in the portfolio.

Zacca is already looking ahead to new ways of wringing more revenues and greater profits from the group’s balance sheet.

Its joint-venture insurance outfit Sagicor Costa Rica is reported to have posted a particularly good year, contributing the bulk of a $311-million share of profits from joint ventures – the other joint venture being a Jamaica-based microcredit outfit, Travel Cash Limited. Some $117 million of those profits came in the final quarter.

The group invested $683 million in the Costa Rica business during the year and, according to Zacca, had started acquisition talks before the pandemic as part of a planned expansion of the business throughout Latin America.

The expansion has been stalled by the pandemic, with the potential seller having become reticent about selling while the market and asset prices were depressed. Sagicor Costa Rica is said to have done bumper business selling travel insurance, mandated by the government there after the pandemic hit.

New loan growth at Sagicor Bank, in the region of 20 per cent over 2019 levels, is being eyed as a source of investment to generate new business. This is expected to cover all types of loans, including a significant corporate and expanded mortgage portfolio, and assist the new Sagicor Bank SME Resource Centre that recently launched operations in Kingston with state incubator, the Jamaica Business Development Corporation, as a collaborator. A slate of new digital payments products is also to be rolled out by the bank, in line with industry trends.

Correction: The story was adjusted to remove incorrect information that the sale of Playa shares contributed to growth in Sagicor's cash holdings. The figure for assets under management was also adjusted from $90 billion to $905 billion.