EVs seen as likely to remain more costly for Jamaicans 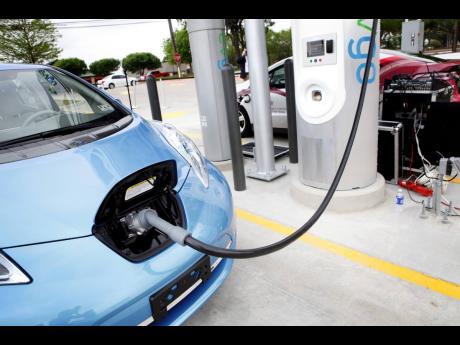 The cost of owning electric vehicles, or EVs, hovers at about 10 per cent higher than petrol-powered cars, which creates a barrier for their adoption in Jamaica, according to a recent document published by power utility watchdog Office of Utilities...

The cost of owning electric vehicles, or EVs, hovers at about 10 per cent higher than petrol-powered cars, which creates a barrier for their adoption in Jamaica, according to a recent document published by power utility watchdog Office of Utilities Regulation, the OUR.

The cost of ownership includes the purchase price, servicing, and electrical charging over 15 years, the expected lifespan of the vehicle, according to the OUR consultation document entitled Proposals for a Regulatory Framework to Facilitate the Penetration of EV in Jamaica.

The regulator expects to publish a framework for EVs by August 3 and is currently seeking comment and feedback from the public.

Officially, there are 10 registered electric vehicles in Jamaica, but the number is expected to grow each year. The current number pales in comparison to Barbados with more than 400 EVs up to 2018 and The Cayman Islands, with over 160 in 2019, according to the OUR document.

The regulator, in comparing petrol cars such as the Honda Fit, at US$59,173, and the Nissan Versa Note, at US$58,139, with a Nissan Leaf electrical vehicle at US$63,313, said the traditional vehicles would be “7.0 to 10 per cent” less expensive to own and operate than the EVs.

“It would not be an economical decision at this stage, given that internal combustion engines, or ICEs, have already established a reasonable leverage in the Jamaican market in terms of comfort, reliability, and brand appeal,” the OUR said.

One EV owner, Ian Watson, says that it’s not a certainty that an EV will be costlier.

“It really depends,” said Watson, the founder of FimiPro Limited, which, over the years, has repaired hybrid cars and now replaces EV batteries. “Electricity is relatively expensive in Jamaica, but you can still save probably 30 per cent on fuel,” he said.

He also told the Financial Gleaner that he saved around US$10,000 (about $1.5 million) by sourcing his own pre-owned electric vehicle. “Since I acquired the car earlier this year, prices are up by about US$2,000,” he said, but also noting that the cost of EVs would decline with more models and government incentives.

Watson added that a big concern relates to the cost of EV battery replacement after 15 years of usage and that prospective buyers, therefore, need to ensure that the car has a functioning battery at purchase.

In addition to the cost of EV ownership, the OUR is otherwise highlighting concerns regarding installation and ‘ownership’ of charging stations by independent operators, outside of the Jamaica Public Service Company, JPS, which holds the monopoly for power distribution, and under current law, can be the only supplier of electricity to the charging stations.

The power utility’s exclusive electricity licence expires on July 8, 2027, but is likely to be renewed, said the OUR, which has recommended that an exemption for EV charging stations be carved out of the Electricity Act, which governs the JPS’ licence.

“The OUR has suggested that the introduction of a competitive charging market be expressly addressed in governing legislation and that steps be taken to facilitate this in the applicable regulatory framework, including the exclusive licence,” the regulator told the Financial Gleaner.

The Fair Trading Commission has taken no position on the issue and first wants to study the OUR document.

“We have not examined the issue, but it is something we can consider,” said the commission’s executive director, David Miller.

The OUR says that the power-transmission network has more than enough capacity to handle 30,000 EVs, without disruption or undue burden.

“The assessment of the operation of the electricity grid shows that the electricity transmission system will not experience network loading violations on the transmission system for EV penetration levels up to 5.0 per cent or 30,000 EVs. It is estimated that simultaneously charging this number of EVs will impose an incremental electricity demand of 153MW, which is approximately 24 per cent of system current peak demand,” said the consultation document.

It is estimated that savings of around 2 per cent of GDP could accrue to Jamaica from EV adoption of 12-16 per cent, according to Minister of Science, Energy and Technology Daryl Vaz, as reported by state media.