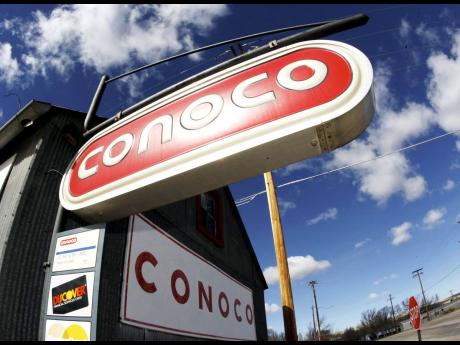 A Conoco service station is seen in Glenrock, Wyoming. ConocoPhillips, one of America’s largest oil companies, has been going after the Caribbean assets of the Venezuelan government, including in Jamaica, where such assets were placed in receivership. The recovered funds will largely be paid over to ConocoPhillips.

K enneth Tomlinson of Business Recovery Services Limited has been appointed receiver and empowered by the Supreme Court to recover and distribute the Venezuelan assets in Jamaica — which are mainly monies owed to Caracas and state enterprises — to...

K enneth Tomlinson of Business Recovery Services Limited has been appointed receiver and empowered by the Supreme Court to recover and distribute the Venezuelan assets in Jamaica — which are mainly monies owed to Caracas and state enterprises — to American oil company ConocoPhillips.

The July 15, 2021 order varies an earlier order the court made in February appointing Tomlinson as interim receiver, essentially to search for and establish the existence of the assets. The development is the latest in a long-running multijurisdictional bid by the US oil company to get compensation for the South American country’s expropriation of its assets in Venezuela 14 years ago.

In July 2020, the US oil firm’s lawyers were successful in getting the Jamaican court to enforce a 2018 decision of an arbitration panel of the International Chamber of Commerce that found that Venezuela, under the leadership of then President Hugo Chavez, had illegally expropriated the country’s joint-venture operations with ConocoPhillips in 2007.

The Venezuelan state companies are said to have initially made payments towards the award, but ConocoPhillips claimed that they defaulted on their obligations and as at February 2020, the amount outstanding, including accrued interest, was US$1.29 billion, with interests continuing to accrue daily on that amount.

The July 15 order by Justice David Batts was granted in response to an application filed in May by ConocoPhillips’ lawyers, Kashina Moore and Jovell Barrett of Nigel Jones and Company. According to court documents, the receivership covers “assets and alleged assets ... including but not limited to any right to receive principal and interest debt repayments owed now or in the future by the State of Jamaica, any department of the Government of Jamaica or the PetroCaribe Development Fund”.

The order covers such monies owed to Venezuela’s central bank Banco Central de Venezuela, PDVSA and PDVSA Petróleo, or any parties to which they may have assigned the rights to those asswets.

As in February, the court in July ordered that legal cost for the action be borne by the Venezuelan entities, which were again unrepresented in the Jamaican court proceedings. The order and other documents requiring to be serviced on the Venezuelan firms are to be served via email and courier to their agents in London in the United Kingdon and Washington, DC in the United States.

Efforts to get a comment from Antonio Sanchez, charge d’affaires of the Venezuelan embassy in Kingston, were unsuccessful.

The February interim receivership order had excluded payment being held by the Jamaican government that is due to Venezuela corporation PDV Caribe SA for that company’s 49 per cent stake in Jamaican oil refinery Petrojam, which the Andrew Holness administration compulsorily acquired two years ago. The July order makes no mention of those funds.

In justifying the exclusion of the share compensation money, Supreme Court Justice Kissock Laing said in February that the local court did not have the means through which to distribute compensation for the shares in Petrojam Limited.

“Accordingly, I find that such funds do not constitute property which can properly be the subject of a receivership order,” Justice Laing ruled.

The order made by the court includes monies owed by Jamaica to Venezuela for oil supplied under the PetroCaribe oil deal signed in 2005 between oil-producing Venezuela and several Caribbean and Latin American countries, providing huge concessions, including cheap oil, and delayed payments, at the height of a global oil price hike.

Jamaica’s payments to Venezuela were affected after the US-imposed sanctions on the country, now led by Nicholas Maduro, who continues to have a sour relationship with the US and other Western governments.

The money due to Banco Central de Venezuela, believed to have been about US$130 million two years ago, and unable to make its way to the Venezuelans because of the inability to utilise normal US-based intermediary banks, has been lodged in an escrow account by the Jamaican government.

The PetroCaribe Fund was created in 2006 as a self-financing entity whose profits serviced Jamaica’s oil debt to Venezuela and were invested via loans and grants in several national development projects to the tune of more than $335 billion. The fund ceased to exist as a statutory body in early 2019, and its holdings of US$1.6 billion was incorporated into the Jamaican government’s central treasury.