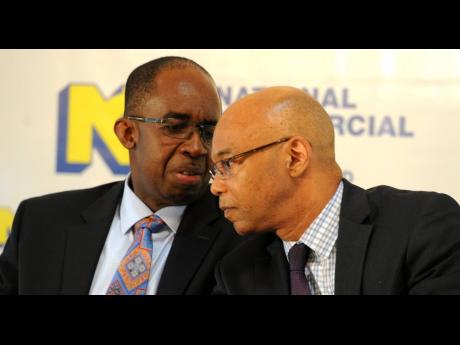 Vernon James, the former head of NCB Insurance, will head the venture.

“It is a digital payment app solution, similar to Venmo and Cash App, that customers can use to send and receive money and make payments at merchants and other stores. Customers can sign up in minutes,” said NCB Financial President & CEO Patrick Hylton.

“The idea is that, if you have a phone, you can link,” he said at the banking group’s quarterly investor briefing.

NCB Financial has been investing billions of dollars annually under its digitalisation programme. Last year, for example, it poured $9.64 billion into computers. So far, for the nine months that have elapsed in its current financial year, that outlay was nearly $3.3 billion.

The size of the investment in Link was not disclosed. The app is currently in ‘test’ mode, Hylton said.

Jamaicans have access to several digital wallets locally and overseas to send and receive funds. Small businesses however, have fewer options to easily integrate with their websites or point of sale machines in stores. Small businesses use services such as PayPal, Venmo and CashApp for quick payments.

NCB Financial also operates a mobile money system called Quisk. It wasn’t immediately known the difference between Link and Quisk, but it appears that Link will allow for e-commerce integration. NCB launched Quisk in 2016, in partnership with American technology company Quisk Incorporated, according to NCB statements on the service.

All payments through Link will be “processed through the local commercial bank”, said NCB Financial’s Chief Financial Officer and Deputy CEO Dennis Cohen.

NCB Financial Group, the operator of Jamaica’s largest commercial bank, made $4.7 billion in net profit for the third quarter ending June 2021 or one-third lower than the $6.95 billion over the similar period a year earlier. The group also announced that it would not pay a dividend. NCB Financial shares, which trade as NCBFG, dipped by 1.66 per cent Friday to $139.07 on the results, which were posted on the stock exchange that day.

“Within the context of the economic downturn because of the pandemic, the group continues to deliver commendable performance as business and consumer activities rebound,” stated the group in the preface to its financials.

In mid-July, some $13.8 billion worth of NCB Financial shares traded, coinciding with top executives, Hylton and Cohen, surrendering shares at the banking conglomerate under a revised compensation arrangement. On Friday, they said surrendering their NCBFG shares would benefit NCB Financial Group but did not disclose the details of the revised compensation arrangements.

Hylton added that sacrifices are being made at the very top of the group.

“It was important for us to give a tangible demonstration of the owner’s mindset. The owner is willing to make an adjustment which, in the short run, is not in the benefit for the individual, but for the good of the company,” he said.

NCB Financial Group is owned by Chairman Michael Lee-Chin, through different entities, with AIC Barbados as the top owner with a 51.7 per cent shareholding. The shares held by Hylton and Cohen put them within the top 10 largest shareholders.