To revive sales, Berger puts a bold sheen on its image 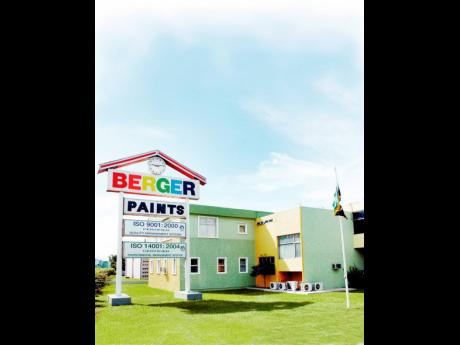 Berger Paints Jamaica Limited is banking on its Boldly Berger campaign to claw back revenue lost to the pandemic, by targeting hospitality businesses that are refurbishing their plants and household spruce-up projects during the peak season for...

Berger Paints Jamaica Limited is banking on its Boldly Berger campaign to claw back revenue lost to the pandemic, by targeting hospitality businesses that are refurbishing their plants and household spruce-up projects during the peak season for paint sales, August to December.

So far, the investment in Berger’s transformational agenda seems to be bearing fruit, with revenues earned from contract customers growing by 62 per cent during the quarter April to June. The growth in sales pushed the company back into a profitable position at $1.8 million, compared to losses of $21 million for the comparative period in 2020.

“Consumers are loving the new look and feel and which is executed through Jamaica with our out-of-home advertising and in-store branding. We took a calculated risk by changing the logo, packaging and launching a new message all at once, which is atypical, but this was the right direction for the brand as evident in consumers’ feedback,” General Manager Shashi Mahase told the Financial Gleaner.

In a move to increase its share of the market, Berger had put in motion a plan to deepen its relationship with customers over the period 2020 to 2022 through research and development, the addition of new products and renewed focus on the automotive paints segment through increased distribution of the PPG and Roberlo brands.

The revised strategy came after earnings of the company plunged from $173 million in 2018 to $29 million in 2019. Sales revenue had also drifted south, falling from $2.7 billion to $2.5 billion.

But with the outbreak of COVID-19, some of those initiatives were put on hold and the slowdown in sales left the company with a 156 per cent dip in year-over-year earnings at $11.6 million at the end of 2020. Sales also continued to fall, dipping to $2.37 billion.

Berger spent the latter half of the year right-sizing its business and strategising ways to increase market share, which it estimated at 52 per cent for paints and three per cent for automotive paints.

“We continue to invest in people, plant, assets and the industry on a whole. We are coming out of a year and a half of the most chaotic, unpredictable times that the world has ever seen and as such, I believe the management team has done a phenomenal job in navigating those challenging times,” Chairman Adam Sabga told shareholders during the company’s annual general meeting on Thursday.

“We have managed to turn that tide and learned to operate within the confines of the new norm, and those results are clear,” he said.

Berger’s management is somewhat optimistic about the Jamaican operation’s performance over the short to medium term, but there are concerns over further devaluation of the Jamaican dollar and supply chain challenges.

The Suez Canal blockage in March of this year, local currency depreciation, along with expenses associated with the strong volumes were blamed for a 71 per cent increase in the cost of doing business in the June quarter.