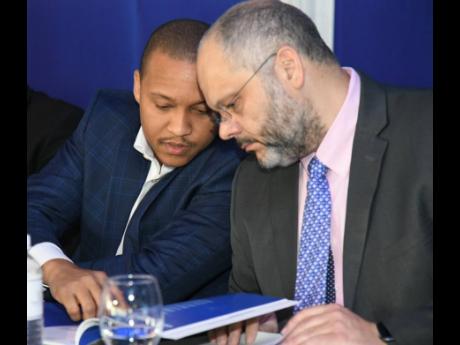 Brokerage firm Barita Investments Limited and its regulator, the Financial Services Commission, FSC, say last week’s release of an addendum to the prospectus for Barita’s current share offer seeking to raise at least $10 billion, is intended to clear the air in respect of questions raised in sections of the Caribbean regional and local media, and provide prospective investors with clearer and more updated information.

The additional information includes the company’s financial performance as contained in Barita’s nine-month unaudited financials to June 30, 2021, and more detailed information regarding some related-party relationships and transactions.

“There were issues in the marketplace that FSC decided that the issuer should release an addendum to provide additional information. We reviewed the content of it and issued our non-objection,” David Geddes, the FSC’s director of stakeholder engagement, communication and international relations, told the Financial Gleaner on Tuesday.

Geddes declined to give further details of the FSC’s communication with Barita, noting that the regulator, as an operating principle, does not comment on specific matters related to licensees.

However, in a September 13 letter to Barita’s General Manager, Paula Barclay, a copy of which was obtained by the Financial Gleaner, FSC Executive Director Everton McFarlane thanked Barita’s management and directors for what he described as their “constructive engagement” in response to the regulator’s request for the addendum. The FSC suggested that the request for the additional information and its release to the investing public are part of the regulator’s ongoing implementation of a new risked-based supervisory mandate.

Barita officials, too, while confirming what they say is the collaborative nature of the FSC engagement leading to the release of the addendum, are talking up what they describe as a strong risk-management framework at the investment house.

The addendum essentially updates the management discussion section of the prospectus to provide financial performance data from the third-quarter results to June.

Barita’s 2020 APO, launched around the same time, also relied on its second-quarter results.

In the updated information, apparently answering questions raised about its business size, fee income and overall earnings, Barita said in the nine months this year it completed over 20 public and private investment banking transactions valued at over $20 billion for local and regional entities. It said over the period, the company generated $696 million in direct fees from its structured finance division.

Noting that it was giving keen focus to building out its alternative financing platform, Barita said that at June 30, revenues from alternative investment business lines and its unit trust business combined to drive a $849-million, or 80 per cent, rise year-over-year in asset management fees to $1.9 billion.

The addendum also provided information on what it described as Barita’s “off-balance sheet arrangements”, in an apparent reference to questions raised about BIL’s relationship with St Lucia-registered companies Barita Finance Limited and 294 Inc.

Barita said it enters into various types of off-balance sheet arrangements in the ordinary course of business, and that its involvement in these arrangements can take many different forms, including, without limitation, unitised fund products; holding senior debt in other unconsolidated special-purpose entities that is generally collateralised by private credit, real estate, and listed equities; and providing guarantees, loan commitments, and letters of undertaking on behalf of clients.

Chambers said the off-book vehicles were being utilised by Barita to pioneer new, structured market products outside of repurchase agreements, which will be offered to clients later.

“When you are pursuing new alternative investment strategies, the broker/dealer typically seeds the strategy with funding, and, over time, we offer the various opportunities to clients. We have seeded over $6 billion in alternative investment strategies. We are building a pipeline of opportunities and developing those pipelines to the point where it is appropriate to introduce them to clients,” he said.

Chambers pointed to Cornerstone’s previous declarations that it had raised US$167 million from third-party banks and financiers, with 40 per cent of that amount coming from its shareholders. Some US$139 million of that, he said, has been pumped into Barita, including the US$22 million to purchase the controlling stake from former majority owner and Barita’s founder, Rita Humphries-Lewin.

In relation to Cornerstone continuing to be a major participant in fund raises, the addendum noted that since March 2019, the parent company has put up $16 billion, or about 68 per cent, of the $23.7 billion raised in permanent capital.

Chambers said Cornerstone has been keen on maintaining its shareholding and preventing dilution of its controlling position.

“Cornerstone has generally held close to 75 per cent shareholding in Barita, so to the extent that Barita’s fundraising is in the form of equity, Cornerstone would have to put up its fair share of that equity in order to avoid significant dilution. Any parent company that generally sees a business positively would want to maintain a minimum shareholding in the business,” he noted.

According to Ramon Small-Ferguson, Barita’s vice-president for asset management and research, the frequent, large fund raises are a manifestation of the investment firm’s deleveraging and risk-mitigation strategies.

“We may have grown quickly, but it has been in the context of a very prudent approach to risk management, and the growth has been fuelled responsibly by equity capital as opposed to layering on leverage, which is typical of some financial institutions,” Small-Ferguson said during the interview with the Financial Gleaner, ahead of the release of the addendum.

Making the point that the company was about half as leveraged as others in the financial services sector, he noted that Barita’s assets at June this year were just under three times its equity, against an industry average leverage of about six times equity.

Barita reported total assets of $84.2 billion at June 2021, with total liabilities of $53.9 billion and shareholder equity of $30.3 billion. For the nine months ending June, the brokerage house made a net profit of $3.7 billion, of which $1.6 billion was generated in the third quarter.

“What that implies is that we naturally have more shock-absorbing capability,” said Small-Ferguson.

Barita’s financial profile creates a backdrop for what is expected to be a more aggressive investment push into more alternative investments.

“We believe that there is a very solid lane of opportunity in alternative investments and, specifically, we have been looking at real assets such as real estate. We did a good bit of shopping in that respect during the more uncertain period of the pandemic,” the Barita vice-president said, without elaborating.

Asked if its low debt-to-equity ratio will make Barita more of a risk-taker going forward, Small-Ferguson said it positions the company to pursue better risk-adjusted returns for its shareholders, even as the investment bank maintains its equity-focused growth, relatively low leverage, and a robust risk-management framework.

“One of the things that we have prided ourselves on, in particular over the last three years, is that we have maintained a very solid credit portfolio. Even during the pandemic, we were not affected by any restructurings or defaults. As a policy, Barita does not deal in distressed debt. That’s not an investment strategy of ours,” Small-Ferguson said.