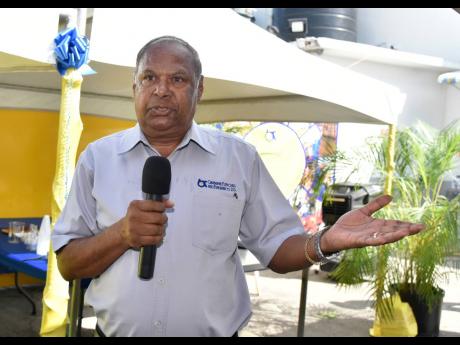 Caribbean Flavours & Fragrances Limited, CFF, is taking another shot at finding markets for its sugar-reduction substitute, Flavour Fit, but this time it’s marketing the product as an ingredient for baked goods.

The company is in discussions with a customer in Barbados for use of the product, which was originally intended to capitalise on the trend away from sweetened beverages in Jamaica as consumers became more health conscious.

CFF first launched the product four years ago, in 2018, when it retooled and upgraded its manufacturing plant, secured the Safe Quality Foods Certification, and rolled out new products, including Flavour Fit, to local and regional business customers.

The sugar reducer was timed to take advantage of directives from the Jamaican government that manufacturers were to reduce the sugar content in beverages they sell and market in Jamaica or face higher taxes. But with no strict enforcement of the low-sugar policy by the government, compliance with the directive lagged and only a handful of local manufacturers took up CFF’s product.

But at its ‘Flavours Open Day’ event at its Spanish Town Road, Kingston home on Wednesday, Caribbean Flavours director Anand James said the company has already begun reinvesting in the product and training staff on its formulation in hopes to supply the offshore customer, and intentions by the Government to eventually enforce policies around low-sugar beverages.

“The Government has been talking about it again, and we believe that we will have a policy sometime in the near future,” James said.

In the meantime, Managing Director Janice Lee told the Financial Gleaner that the company is looking for business for Flavour Fit in the Caribbean.

“It’s being used in other countries. They have had very good success in Peru and Mexico, so we are still working with it because it’s not only for drink, but for baked products. Right now we are working with a company in Barbados to use it in their baked product,” Lee said.

Outside of its renewed push into the reduced-sugar market, CFF is looking to grow the customer base for its standard flavourings line. On Wednesday, the company launched three new flavours: mixed berry, tropical surprise, and yaad blend – which is a blend of mango, pineapple and ginger.

CFF earns most of its revenues from large businesses, but the new flavours are being pushed at small to medium-sized beverage manufacturers. The company’s business model is built around business-to-business sales.

“We are continuously developing new products and sometimes customers ask for specific products, and other times we will do our own development. We developed these new products on our own, and we have been meeting with small and medium-sized companies to sensitize them about the products,” she told the Financial Gleaner.

“The small manufacturer, say a man that makes bag juice, may carry five flavours, and typically may want to stick with those flavours because it’s working for them. But some will come and ask about the new flavours that we have,” Lee added.

For the quarter ending June, CFF grew revenues 11 per cent, while earnings narrowly ticked by less than one per cent to $24 million. Revenue inflows over six months, January to June, amounted to $360 million, making it the company’s best half-year performance to date. Earnings for the half-year rose to $44.75 million, up 8.55 per cent.